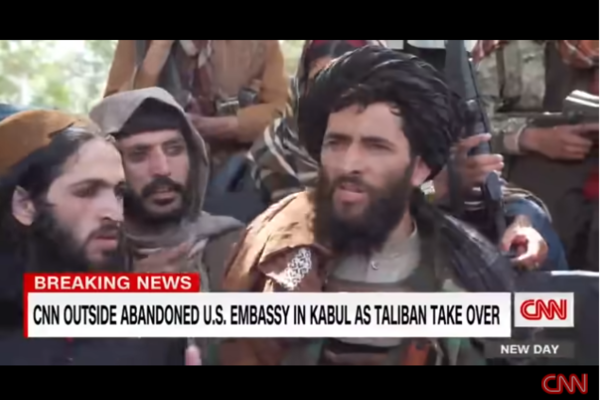 “All of the entrance gates to the airport were closed on Saturday morning because of the dangerous situation,” the New York Times reported, adding that the U.S. embassy in Kabul is advising evacuees not to travel to the airport in light of “security threats.”

“Because of potential security threats outside the gates at the Kabul airport,” the embassy alerted on its website, “we are advising U.S. citizens to avoid traveling to the airport and to avoid airport gates at this time unless you receive individual instructions from a U.S. government representative to do so.”

The active security threats come as the New York Post reported the Taliban is “now attempting to take their U.S. passports and identification orders in an attempt to stop them from leaving the country.”

A Taliban fighter (R) searches the bags of people coming out of the Kabul airport in Kabul on August 16, 2021, after a stunningly swift end to Afghanistan’s 20-year war, as thousands of people mobbed the city’s airport trying to flee the group’s feared hardline brand of Islamist rule (Photo by Wakil Kohsar / AFP) (Photo by WAKIL KOHSAR/AFP via Getty Images).

“I got to the gates and was about to show my passport, but the Taliban got it, and he said you are not allowed to go through and wouldn’t give it back,” one Afghan American on the ground told the Post. “I was lucky a U.S. marine was right there and forced him to give it back.”

Former Navy SEAL Ephraim Mattos, who works to evacuate people on the ground, also confirmed the reports to the Post.

“U.S. passports, driver’s licenses — they are confiscating those pieces of documentation from American citizens,” said Mattos. “They lose proof of who they are, and this has happened on multiple occasions in multiple places”:

A Passport Processing employee uses a stack of blank passports to print a new one at the Miami Passport Agency (Joe Raedle/Getty).

The crisis on the ground in Kabul, Afghanistan, comes after President Joe Biden claimed Friday that to the “best of our knowledge – Taliban checkpoints – they are letting through people showing American passports.”

But Biden’s public relations strategy does not square with media reports on the ground or with his own defense secretary, who stated Friday Americans have been abused and beaten on the ground:

Reporting on the ground also confirms Washington Post reports that indicate the Taliban fighters are blocking “access” to the airport “with gunfire and violence.” In another report, the Taliban even attacked CNN’s camera crew.

Media reports suggest an estimated 10,000 to 40,000 American citizens are stranded in Afghanistan.