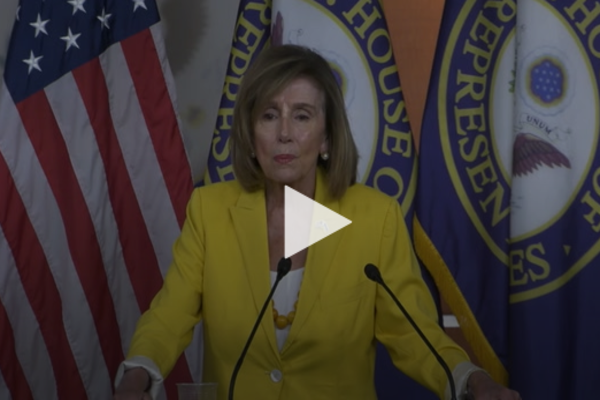 (breitbart) – House Speaker Nancy Pelosi (D-CA) said the Congressional delegation’s visit to Taiwan stands as an “unequivocal statement that America stands” with the “island of resilience.”

The 82-year-old politician landed in Taiwan late Tuesday evening local time, in defiance against China’s warnings, as well as those of the Biden administration:

China’s foreign ministry claims Chinese dictator Xi Jinping recently told President Biden, “Those who play with fire will perish by it,” adding, “It is hoped that the U.S. will be clear-eyed about this.”

Biden previously advised against Pelosi’s trip, stating that the U.S. military assessed that “it is not a good idea right now.”

The delegation’s visit is significant, as former House Speaker Newt Gingrich stands as the last official of her level to visit Taiwan, doing so in 1997.

“Our visit reiterates that America stands with Taiwan: a robust, vibrant democracy and our important partner in the Indo-Pacific,” Pelosi said on Twitter, sharing her op-ed detailing the purpose of the trip:

Pelosi, in the op-ed, pointed to the Taiwan Relations Act, identifying it as “one of the most important pillars of U.S. Foreign policy in the Asia Pacific.” The act, she wrote, provided the framework for a relationship “rooted in shared interests and values: self-determination and self-government, democracy and freedom, human dignity and human rights.”

It also made a vow, she wrote, that the U.S. would “consider any effort to determine the future of Taiwan by other than peaceful means… a threat to the peace and security of the Western Pacific area and of grave concern to the United States.”

“Today, America must remember that vow. We must stand by Taiwan,” she wrote, deeming it an “island of resilience” and pointing to the threats issued by Beijing, which has heightened tensions in a variety of ways — from cyber attacks to economic pressure.

In the face of the Chinese Communist Party’s (CCP) accelerating aggression, our congressional delegation’s visit should be seen as an unequivocal statement that America stands with Taiwan, our democratic partner, as it defends itself and its freedom.

Ultimately, Pelosi added that the visit is part of a broader trip focusing on shared interests, but she made it clear that it is also absolutely symbolic of the U.S. support of Taiwan in the face of threats from the Chinese Communist Party (CCP).

“By traveling to Taiwan, we honor our commitment to democracy: reaffirming that the freedoms of Taiwan — and all democracies — must be respected,” she added.

In a separate statement, Pelosi said the visit in “no way contradicts longstanding United States policy, guided by the Taiwan Relations Act of 1979, U.S.-China Joint Communiques and the Six Assurances.”