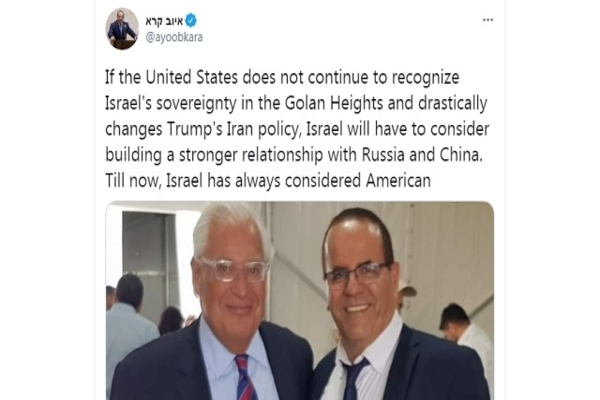 Knesset member Ayoob Kara, who is part of Israeli PM Benjamin Netanyahu’s Likud party, on Tuesday threatened that Israel is prepared to abandon America and ally with China and Russia if Biden “reneges on America’s recognition of Israeli sovereignty over the Golan Heights and signs a nuclear deal with Iran.”

The public statement, which our media is refusing to report on, comes a little over one month after the US congress voted to pass a law mandating we send nearly $40 billion in aid to Israel over the next decade (even if, as Nancy Pelosi said, America “crumbles to the ground”).

“If the United States does not continue to recognize Israel’s sovereignty in the Golan Heights and drastically changes Trump’s Iran policy, Israel will have to consider building a stronger relationship with Russia and China,” Kara said, tweeting out a picture of himself with former US Ambassador to Israel David Friedman.

“Till now, Israel has always considered American interests in relations to Russia and China,” Kara continued. “In the past, we even cancelled a major arms deal with China in order to appease the United States.”

“Yet if Biden reneges on America’s recognition of Israeli sovereignty over the Golan Heights and signs a nuclear deal with Iran, a deal that endangers the existence and the security of the State of Israel, we must work to build stronger strategic ties to China and Russia, starting with the Haifa port deal.”

These are not idle threats. Israel has been buddying up with China for years. Even Mike Pompeo last year had to tell Netanyahu to back off on making so many deals with China.

As Kara noted, Israel has also gone ahead with the Haifa port deal with China despite US opposition.

As we saw in late December, Netanyahu gave a hero’s welcome to Jonathan Pollard — a traitor who stole US military secrets while working at the Pentagon and sold them to Israel.

President Trump, in an act of utter humiliation both for himself and our country, on his last day in office also pardoned Israeli colonel Aviem Sella, the handler of Pollard who never faced justice because he fled to Israel after Pollard got arrested and Israel refused to extradite him.

In another act of humiliation, just last year the US army was forced to abandon a $1 billion Iron Dome missile defense system after Israel refused to hand over the source code even though it was funded thanks to US taxpayers giving them $142 billion in aid.