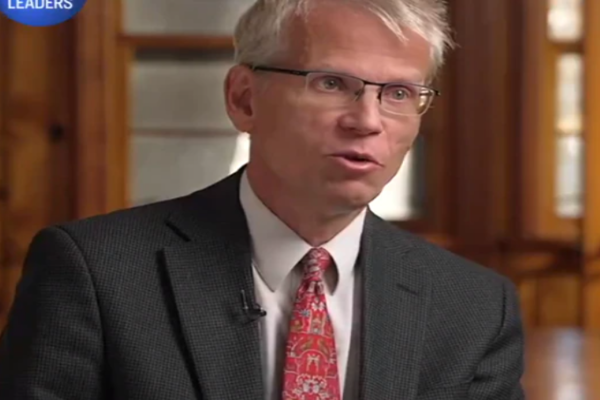 (bigleaguepolitics) – Just as the FDA has now fully approved Pfizer’s COVID-19 shot for children ages 5 to 11, a Harvard University epidemiologist is urging parents to forgo giving their children the experimental jab.

Dr. Martin Kulldorff, a professor of medicine at Harvard Medical School and a biostatistician at the Brigham and Women’s Hospital, said in an interview with EpochTV that the risks of the experimental medicine for children outweigh any potential benefits.

“I don’t think children should be vaccinated for COVID,” he said. “I’m a huge fan of vaccinating children for measles, for mumps, for polio, for rotavirus, and many other diseases, that’s critical. But COVID is not a huge threat to children,” he said on the channel’s “American Thought Leaders” program.

“They can be infected, just like they can get the common cold, but they’re not a big threat. They don’t die from this, except in very rare circumstances. So if you want to talk about protecting children or keeping children safe, I think we can talk about traffic accidents, for example, which they are really at some risk.”

Kulldorf, who reportedly has served on scientific advisory committees to the FDA and the Centers for Disease Control and Prevention, said “there are other things that we should make sure [of] to keep children safe.”

“But COVID is not a big risk factor for children.”

Kulldorf then pointed to CDC data showing that only 195 children under the age of 4, and 442 between 5 and 18, have died from COVID-19 in the United States from the disease’s inception in early 2020 to October 20th, 2021, making the sample size almost 2 years worth of fatalities.

Dr. Robert Malone, the inventor of the messenger RNA technology in the Pfizer and Moderna vaccines, also agrees with Kulldorf on his view of skipping the shot for children.

“There is absolutely no scientific or medical justification for vaccinating children, in my opinion,” he recently posted on social media.

Big League Politics has reported on the potential risks the COVID-19 shot could pose to children before, including a recent peer-reviewed study shared by Dr. Malone which concluded the innoculation is more likely to kill or harm children than the virus itself.

On Thursday Robert W. Malone, a scientist well known for inventing mRNA vaccines and RNA as a drug shared a peer-reviewed scientific study that concluded that a COVID-19 inoculation in children is more dangerous for them than the virus itself….

It is then concluded that given the predictions levied for those 65+, the best case scenario on kids receiving the shot appears to be “very poor”, saying that “the chances of death from COVID-19 [for children] are negligible, but the chances of serious damage over their lifetime from the toxic inoculations are not negligible…”