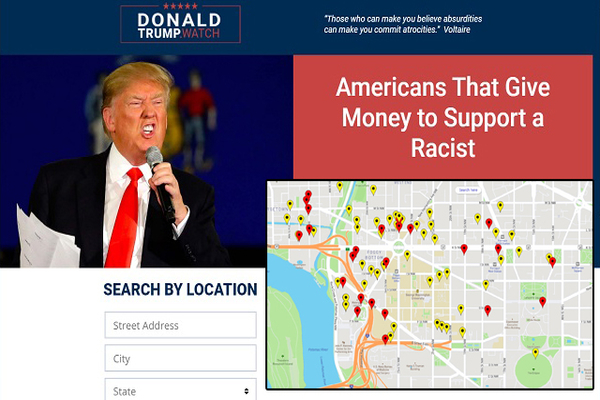 (informationliberation) – A new leftist doxing website created to intimidate Trump donors by exposing their data with the help of Google maps and data allegedly scraped from the FEC is a great opportunity to connect with your neighbors and make friends.

The site, DonaldTrump.watch, was clearly created to encourage terrorism against us but it also helps to show we’re not alone.

The site allows anyone to search throughout the country down to their own neighborhoods and see the names and addresses of all Trump donors (don’t put your address in, just scroll to wherever and click “search here” at the top).

Here’s a shot of the White House:

When you click each tag it brings up the donor’s name, a list of their donations to Trump and their address.

They appear to have a sister site, Donor.watch, which maps out donations for all candidates without labeling anyone as “racist.”

Both sites “Terms of use” pages claim the site is provided by “Public Service Media Group, Inc.” but there’s very little about them on the internet.

Bizapedia has one entry saying, “Public Service Media Group, Inc. is a Delaware Corporation filed on September 17, 2019. The company’s File Number is listed as 7611619.”

The feds could probably make a case this is voter intimidation but I doubt they’ll be interested.

Regardless, we might as well make lemons out of lemonade and use this as an opportunity to connect with our like-minded, patriotic neighbors!