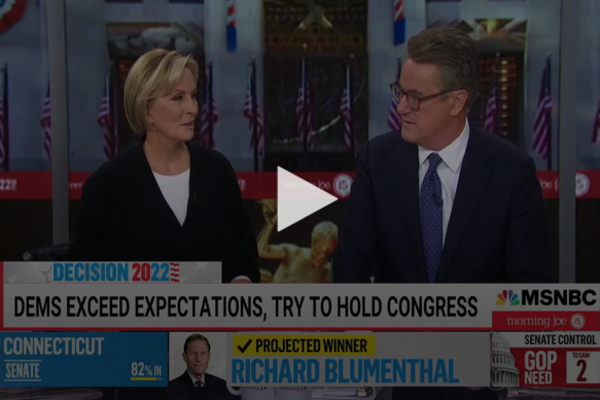 (breitbart) – Democratic consultant and political commentator James Carville said Wednesday on MSNBC’s “Morning Joe” that former President Donald Trump was the reason Democrats did not lose up to 57 seats in the House of Representatives.

Co-host Joe Scarborough asked, “But James, you know, this is just the ebb and flow of politics. Bill Clinton wins big in ’92. Idiots like me get elected in ’94. Obama wins massively in ’08. The Tea Party wins in ’10. Could you explain to people who don’t know politics as well as you how historic last night was?”

Carville said, “I’m going try. If you put everything in the computer, we should have lost 57 seats. The reason is Donald Trump. He brought people out to vote against this. He had a suppressive effect. He out trumped inflation and crime. He out-trumped the normal cycle of the first off-year election with an incumbent president. When political historians unearth this, they are going to find more we missed this morning.”

He added, “The one person who I think is the Democratic candidate of the cycle, my nomination is Josh Shapiro. He got involved in a Republican primary, made sure he had Mastriano. He did not run away from the crime issue. I would make the argument, and you could make the argument he had a large part with Fetterman winning the Senate race. The differential was so big you can’t do it. I barely know him, but I think he’s the candidate of the cycle.”