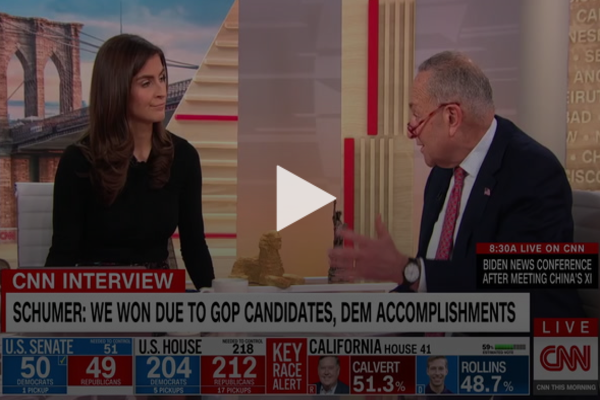 Co-host Kaitlan Collins said, “Are you going to talk to Mitch McConnell? What does that look like?”

Schumer said, “I’m going to say to the Republicans in the Senate who are not the MAGA Republicans, stop letting them lead your party. Work with us to get things done. I intend to sit down with Mitch McConnell and express that.”

He continued, “I intend to sit down with him and say we should be working together. You’re not going to get the extremists in your party to work with anybody, but the rest of us can work together and get some real things done for the American people.”

Schumer said, “It’s different this time because they lost. The red wave proved to be a red mirage. And one, not the main reason but one of the main reasons for sure, was that average American folks, even those in the middle, even those who tended to be Republican, said, ‘I’m afraid of this MAGA. They’re trying to ruin our democracy.’ If you look at the numbers, if you look at the results of the House and Senate, the MAGA Republican way didn’t work. The MAGA Republican candidate, across the board, lost. If you’re a good leader of a Republican Party, you say continuing to follow them is a path to disaster.”