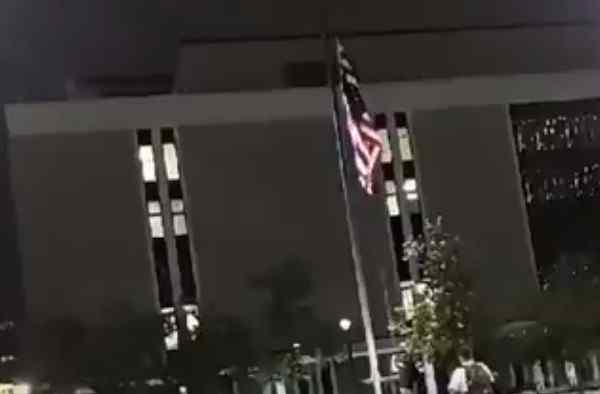 Antifa was on the scene as the protesters broke Flag Code, demanding people shut down their live streams

(Infowars) – Rioters in Portland were recorded as they lowered the American flag, then raised it upside down, as they occupied the area surrounding the federal court house that has been the scene of clashes between federal police and rioters.

As evening approached on Friday, fencing was removed around the Capitol that was “set up to keep people out during repairs and restoration” by city authorities. Joshua Rodriguez, who runs a not-for-profit that helps at-risk youth in the area, wrote on Twitter that the “State warns all employees to flee downtown.”

The fencing around the Capitol that was set up to keep people out during repairs and restoration has been removed temporarily before tonight's “F*ck the Feds” protest. State warns all employees to flee downtown. Radio echoes ”burn the capitol down the statement.” pic.twitter.com/EndkT48oDv

Despite federal police protecting the building under orders from President Donald Trump and Attorney General Bill Barr, protesters were able to lower the American flag, then raise it upside down. At the same time, Antifa reportedly began forcing people to shut down their live streams.

Video shows the flag being raised upside down as sirens, drums, screams, and cheers echoed in the background. After the flag was successfully raised, more cheers and applause erupted.

According to United States Flag Code, the only appropriate time to fly an inverted American flag is as a distress signal during a period of serious danger. Specifically, “The flag should never be displayed with the union down, except as a signal of dire distress in instances of extreme danger to life or property.”

Protests continued in Portland until torrential rain brought them to a halt, with video showing a procession of protesters using umbrellas for their intended purpose leaving the area.

Prior to the deployment of federal police to Portland, sent to protect federal buildings within the city, clashes between protesters and local police continued to become stranger.

In one encounter, a fully disrobed woman sat on the pavement in front of a group of protesters standing in the street, and spread her legs before a number of police officers. The police officers, apparently unsure what to do, left the scene in a hasty retreat.

Earlier this week, after federal police were activated in the city, Portland Mayor Ted Wheeler was tear gassed by federal authorities while showing solidarity with the rioters. As he then fled the area, rioters attempted to assault him, only being held back by his security team.