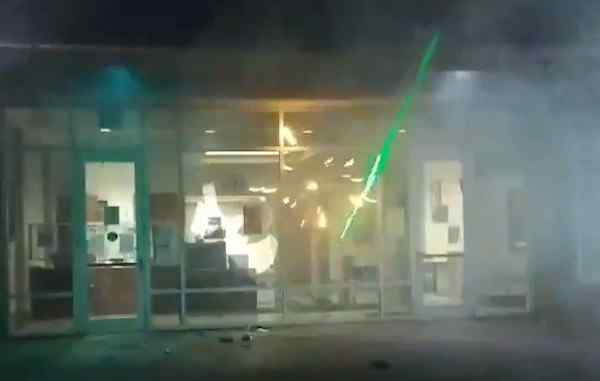 (Breitbart) – Vandals in Atlanta, Georgia, attacked the federal building that is home to the city’s field office of U.S. Immigration and Customs Enforcement (ICE). It appears the vandals broke out windows and sprayed graffiti on the building.

Media outlets report that vandals swept through 180 Ted Turner Drive early Sunday morning. They allegedly smashed windows and sprayed graffiti on the building that houses the Atlanta ICE Field Office and other immigration-related federal offices, including an immigration court.

Signs left behind by vandals read, “No more peace,” and “No cops, no ICE, no borders,” Fox 5 in Atlanta reported.

Fox 5 reporter Emilie Ikeda reported the vandals claimed to “stand in ‘solidarity’ with the ‘Freedom Fighters’ of Portland.

Twitter chatter labeled the damage as an effort to stand in "solidarity" with the "Freedom Fighters" of Portland, where protestors have repeatedly clashed w/agents guarding a federal courthouse. pic.twitter.com/7VNhhsli5Q

In a video posted on Twitter by @AcidVitalism, protesters can be heard yelling “Burn it down, burn it down.” It appears the vandals fired incendiary devices at the building and targeted the interior with green lasers.

DHS/ICE Field Office ransacked by frontliners in Atlanta in solidarity with the freedom fighters of the #PortlandProtests and every other suffering poor person trying to build a new world.#PortlandSolidarity #GeorgeFloyd #RayshardBrooks #BlackLivesMatter pic.twitter.com/kl7t3hiEKA

An earlier post on Twitter by Daniel Hanley, @calamardh, invites people to “rally against fascism in solidarity with Portland.” It sets a start time for the “#AtlantaProtest” as 10:30 p.m. on July 25.

In an exclusive interview with Breitbart Texas, U.S. Customs and Border Protection Acting Commissioner Mark Morgan said the individuals in Portland are criminals not protesters.

“It is so frustrating when I hear these individuals referred to as demonstrators or protesters,” the commissioner said. “They’re not. They are criminals.”

“They are coordinating and planning with wilful intent to destroy federal property and seriously injure federal officers and agents,” Morgan explained. “What they are doing, every single night, they are getting together, they are coordinating, they are organizing with a willful intent to destroy federal property and injure federal agents and officers. They come prepared every single night with deadly weapons, commercial-grade fireworks, lasers, frozen water bottles, rocks, and hammers.”

Breitbart Texas reached out to the Federal Protective Services agency responsible for the security of federal buildings including the Atlanta Field Office.

“Last evening at 180 Ted Turner Ave, Atlanta, Georgia, several windows of the facility were broken and the facility was spray-painted,” an FPS spokesman said in response. “No arrests were made by federal officers. Information on damages should be referred to the General Services Administration.”