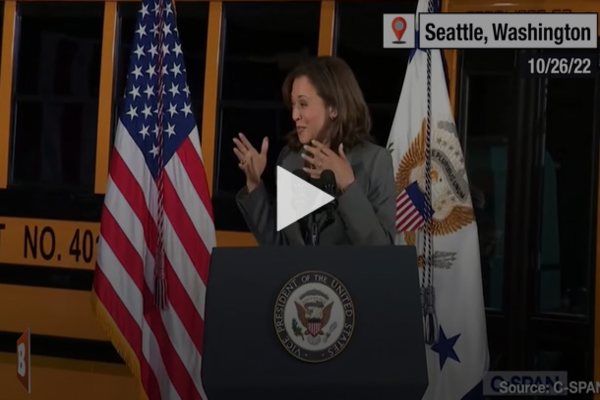 “Today, 95 percent of our school buses are fueled with diesel fuel, which contributes to very serious conditions that are about health and about the ability to learn,” she said during her remarks, referring to the pollution caused by school buses.

The vice president spoke about school buses at an event in Seattle, promoting President Joe Biden’s attempt to replace diesel powered school buses with electric ones.

Despite her criticism, Harris spoke warmly about her memories of the traditional yellow school bus.

“Who doesn’t love a yellow school bus, right?” she asked the audience encouraging them to raise their hands if they had similar happy memories of traveling on the bus to school.

Harris recalled the “nostalgia” and “excitement and joy” of going to school on a bus.

“There’s something about the and most of us, many of us went to school on the yellow school bus, right?” she said. “And it’s part of our experience growing up.”

Harris said that electric school buses represented everything that the Biden administration stood for, including saving the planet from global warming.

“We owe it to our children to, right now, take these issues very seriously. The clock is ticking loudly,” she said. “We are witnessing, around our country and around the world, the effects of extreme climate.”