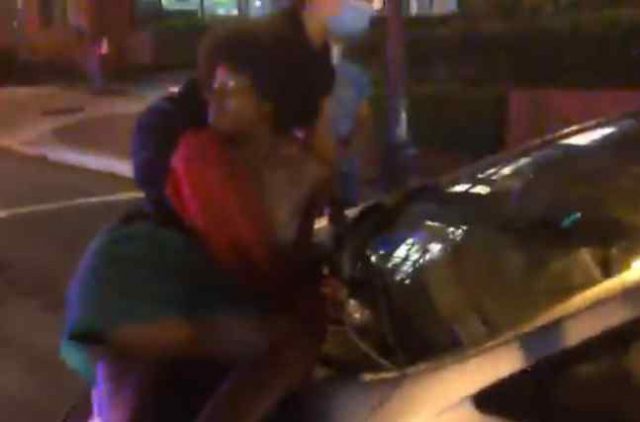 (Gateway Pundit) – More proof that the left is completely removed from reality.

Violent leftists in Arlington, Virginia mobbed a woman who tried to get away from their street protest.

The mob banged on her car, beat her windows, jumped on her hood, screamed at her and threatened the poor woman who just wanted to escape their violence.

Then the protest mob was OUTRAGED that police would not arrest this woman.

This is your modern day Democrat Party.

As we blocked streets, certain drivers got annoyed and attempted to maneuver their way around us. This particular white woman tried to cut through a gas station. Me and a couple other protestors stood in front of her car and demanded she turn around. Instead she steps on the gas. pic.twitter.com/ODL1Evmmzf

Finally cops come but instead of arresting this woman, or asking for her ID, registration, etc., they turn towards us and begin pushing us. We are BEGGING them to arrest this woman who just tried to run over protestors repeatedly. pic.twitter.com/GUP7wWmDBs

After about 40 minutes, police FINALLY ask for her ID and she claims she is too scared to give it to them because protestors “might take it”. In the meantime myself and other witnesses give our information to officers. pic.twitter.com/2upyodRSGw

After all this time of pushing protestors and protecting this violent white woman, the MPD LET HER DRIVE HOME. Shoving and grabbing protestors who tried to stop her. Police treated us like threats, when she was clearly dangerous.

Police didn’t do shit. They have never done shit. Will never do shit. And will never BE shit. Fuck the police. This is a hate crime. Find this woman.

This is exactly why we need to defund MPD. MPD does not protect citizens utilizing their right to protest, they protect a woman who tried to run over protestors. Police DON’T keep us safe. The only thing police are good at is brutalizing Black people. DEFUND MPD.

These people are crazy.