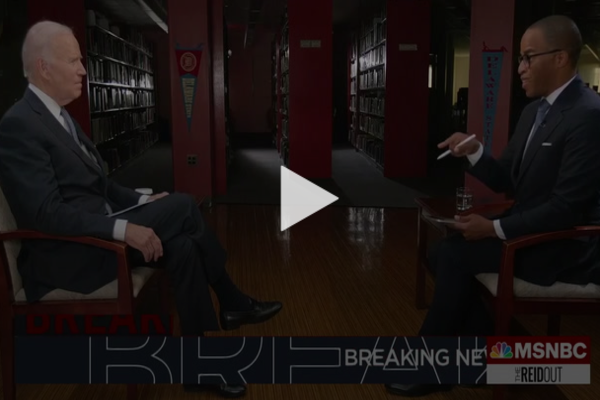 President Joe Biden said Friday on MSNBC’s “The ReidOut” that he intends to run for re-election in 2024, and his wife, first lady Jill Biden, supports him.

Anchor Jonathan Capehart said, “Mr. President. you haven’t officially said you’re running for re-election, but NBC’s Mike Memoli, who you know well, quotes a senior staffer to the first lady that a 2024 re-election campaign, quote, ‘Is something both Dr. Biden and the family fully support.” Seeing that took me back to your 2017 book Promise Me, Dad. You wrote about how your late son Beau insisted you run for president in 2016, as we know you didn’t. You ran in 2020, but you write in the book that Beau said it was, quote, ‘your obligation, your duty to run.’ You also write duty was a word Beau Biden did not use lightly. You’re president now, and there are plenty of people who are saying that you shouldn’t run again because of your age. I’m wondering, what do you think Beau Biden would say to those people who think you shouldn’t run again?”

Biden said, “It’s not so much he would say to those people. What he would say to me, in my view, the only reason to be involved in public life is can you make life better for other people? Depending on who the opponent is, if they have a view that is such an antithesis of what I believe democracy and what I believe is good for average Americans, then his argument was, Dad, you have an obligation to do something. The reason I’m not making a judgment about formally running or not run, once I make that judgment, a whole series of regulations kick in. And I treat myself as a candidate from that moment on. I have not made that formal decision, but it’s my intention. My intention to run again. And we have time to make that decision.”

Capehart said, “Is Dr. Biden is for it?”

Biden said, “My wife thinks that we’re doing something very important and that I shouldn’t walk away from it.”