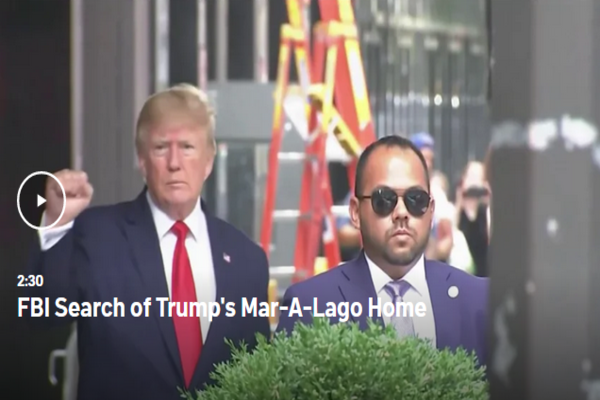 It happened while Trump’s supporters gathered outside the home to protest the FBI’s actions, NBC Miami reported.

Thomas Kennedy said he and friends paid $1,800 to have the banner flown near the estate for several hours.

On what appeared to be his Twitter page, Kennedy described himself as an organizer, writer, immigrant, and Democrat National Committee member.

“It brought me a lot of joy to do so,” Kennedy told the outlet of the stunt, adding he would do it again.

In a social media post Wednesday evening, Kennedy shared video footage of the banner in the sky over Mar-A-Lago.

“This is how you treat wannabe authoritarians like Trump. You ridicule and mock them,” he wrote:

The man said the banner’s message was for Trump and his supporters who gathered on the Southern Boulevard Bridge near the residence.

“Honestly, go do something better with your time,” Kennedy told NBC.

He also posted a photo of the banner on Wednesday afternoon, writing, “We got a little message flying over Mar-a-Lago for Trump and the losers gathered there. Give this a retweet to let them know.”

“These are dark times for our Nation, as my beautiful home, Mar- A-Lago in Palm Beach, Florida, is currently under siege, raided, and occupied by a large group of FBI agents,” Trump explained in a statement. “Nothing like this has ever happened to a President of the United States before.”

After working and cooperating with the relevant Government agencies, this unannounced raid on my home was not necessary or appropriate. It is prosecutorial misconduct, the weaponization of the Justice System, and an attack by Radical Left Democrats who desperately don’t want me to run for President in 2024, especially based on recent polls, and who will likewise do anything to stop Republicans and Conservatives in the upcoming Midterm Elections.

Meanwhile, most Americans said the raid on Trump’s residence motivated them to get out and vote in the midterm election, a recent Convention of States Action/Trafalgar Group survey found.

In addition, “Top Republicans have called for an investigation following the raid, which has ignited the conservative base,” Breitbart News reported Wednesday.