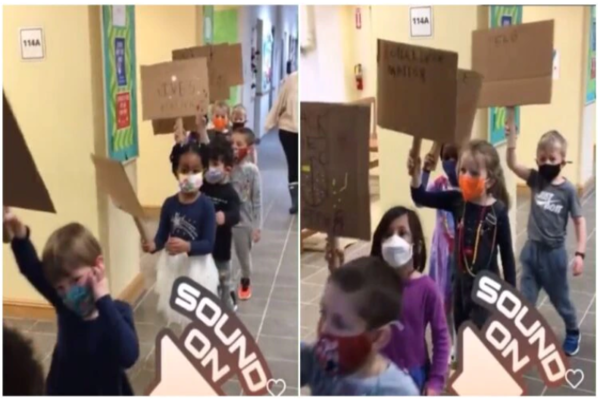 The children, all forcibly masked, are being ruthlessly indoctrinated by far-left abusers who believe that the kids are their property. This reportedly happened in a school in the Washington D.C. area.

Big League Politics has reported on the culture of child abuse that is developing throughout society as leftists rip the mask off:

“A new study has been released showing that the wearing of face masks results in a shocking 23 percent decrease in child development, as the never-ending COVID-19 pandemic destroys future generations.

Brown University scientists Sean CL Deoni, Jennifer Beauchemin, Alexandra Volpe, and Viren D’Sa conducted the study, with the support of consulting firm Resonance, based on data collected by 1,600 children up to the age of 5.

The ELC mean result dropped 23 points within children throughout the pandemic while the VDQ dropped 30 points and the NVDQ dropped by 25 points. The study ultimately concluded that “children born during the pandemic have significantly reduced verbal, motor, and overall cognitive performance compared to children born pre-pandemic.”

“In addition, masks worn in public settings and in school or daycare settings may impact a range of early developing skills, such as attachment, facial processing, and socioemotional processing,” the authors stated…

An entire generation of children may be lost because of mass hysteria surrounding the COVID-19 virus.“

The leftists in control over the educational system are gearing up to let loose their own Bolshevik revolution across America. Institutional child abuse is part and parcel of this satanic agenda to overthrow the Bill of Rights and Constitution.