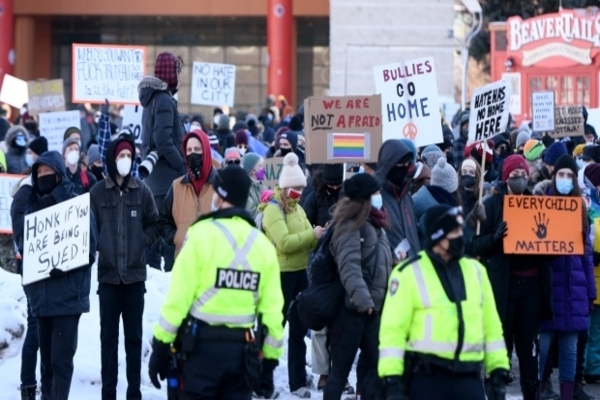 (trendingpolitics) – Freedom truckers and their supporters are being arrested in the streets of the Canadian capital of Ottawa, Rebel News reports.

The Ottawa Police have been contacted to confirm reports of mass arrests. Any response by the police will be posted as forthcoming.

In an important update, Rebel News journalist Ezra Levant reported that police appeared to back off of arrests when media showed up with cameras.

“Hold the line!” a protester shouted as the police backed away from forcing a confrontation.

Ottawa has declared a ‘state of emergency,’ according to CBC TV:

The City of Ottawa declared a state of emergency Sunday afternoon in response to ongoing protests in the downtown core, soon after police announced they would boost enforcement and crack down on the demonstrators’ supply of fuel.

In a statement, the city said the declaration “reflects the serious danger and threat to the safety and security of residents posed by the ongoing demonstrations and highlights the need for support from other jurisdictions and levels of government.”

[…] A local state of emergency will allow Ottawa to work more efficiently to manage essential services and make procurement more flexible, the city said. Provincial legislation grants mayors powers during an emergency to make orders “not contrary to law to implement the emergency plan of the municipality and to protect property and the health, safety and welfare of the inhabitants of the emergency area.”

Earlier in the afternoon, Ottawa police announced they would ramp up enforcement on protesters in the city’s downtown core, handing out tickets and announcing that anyone looking to bring “material aid,” such as fuel, to protesters could be arrested. (read more)

Ottawa police interviewed on the street denied that they had witnessed any “acts of violence.”

The police have threatened to arrest those bringing ‘material support’ to the peaceful protesters.

There were reports that the police were disrupting energy shipments to the truckers.

Journalist Marie Oakes contacted the police media relations, which could not cite the legal basis for the authoritarian measure.

The police began to ratchet up the pressure on the peaceful protesters by issuing tickets.

Ottawa Police Chief Peter Sloly said earlier this week that “every single option” was being considered to end the “intolerable, unprecedented” protests against vaccine mandates and Prime Minister Justin Trudeau.

The police chief admitted that such extreme action would “come with massive risks.” But he added, without providing credible evidence, that “the range of illegal, dangerous and unacceptable activities is beyond the ability to list.” On Friday, Sloly demanded that the truckers “remain peaceful.”

Justin Trudeau denied on Thursday that the nation was considering military intervention.

“One has to be very, very cautious before deploying the military in situations engaging Canadians,” Trudeau said.

“This is not something we’re looking at right now. There is no question of sending in the army,” he told reporters.

After it was clear that the protests would remain peaceful, the Ottawa Police, citing unproven reports of “illegal acts” committed by unidentified individuals, painted the demonstration as an ‘occupation.’

“The hatred, violence, and illegal acts that #Ottawa residents and businesses have endured over the last week are unacceptable in any circumstance and City of Ottawa are bringing significantly greater resources to restore order, hold offenders to account and protect our neighborhoods,” the Ottawa Police claimed.

“The current occupation of the Parliamentary Precinct remains unresolved despite significant success in reducing the number of trucks/demonstrators while preventing riots, injuries and death,” the Ottawa Police continued. “We take no solace in these operational successes. The demonstrators in this red zone area remain highly organized, well-funded, and extremely committed to resisting efforts to end the demonstration safely.”

The Ottawa Police subsequently used the unproven allegations leveled against the Freedom Convoy organizers to demand GoFundMe shut down its crowdsourcing fundraiser worth more than $10 million.

“It’s Friday, February 4th,” Wilson said. “And I’m speaking to you from the hotel at the center of the truckers freedom convoy in downtown Ottawa.”

“This afternoon, the chief of the city police for Ottawa made announcements that are disturbing and should trouble Canadians and those around the world who support this trucker protest for freedom,” the lawyer added. “The police chief essentially announced an assault on the protestors. He announced that very specific measures that we normally only see instituted by oppressive regimes around the world would be initiated. He effectively announced that he is going to be taking away Canadian’s charter right of peaceful assembly and freedom of expression.”

“We are being censored,” he said. “Please get this out to the world.”

On Friday, Ottawa police said they are “stepping up measures to protect downtown neighbourhoods,” according to CTV News Ottawa.

“The strategy includes sending 150 more officers to affected neighbourhoods to target unlawful behaviour connected to the ongoing occupation, which is a protest against COVID-19 mandates,” the report noted.

“The surge will deliver a clear message to the demonstrators: the lawlessness must end,” Chief Sloly said.

“The new measures also include barricading the protest ‘red zone’ using hundreds of concrete and heavy-equipment barricades, cutting off access to the downtown core for more vehicles,” CTV Ottawa continued. “Sloly said this will further isolate and contain the demonstration.”

“Incoming vehicles will be directed to designated parking zones outside the downtown core, and vehicles parked illegally will be ticketed and towed,” the report said. “Police said they may close highways, interprovincial bridges and major roadways to keep vehicles out of downtown. The city released a full list of road closures Friday afternoon.”

“Police say they have also increased efforts to identify protesters who are funding and enabling unlawful activity,” CTV Ottawa reported.

“The hatred, violence, and illegal acts that Ottawa residents and businesses have endured over the last week is unacceptable in any circumstance,” Sloly said.

“The current occupation of the Parliamentary Precinct remains unresolved despite significant success in reducing the number of trucks/demonstrators while preventing riots, injuries and death. We take no solace in these operational successes,” he added.

Rebel News reported that crime in the area of the protests is actually lower than what is typical for Ottawa.

“The crime rate in Ottawa, however, has declined during the convoy’s occupation as reported Friday morning in Blacklock’s Reporter”:

The district saw 31 police calls for robbery, assault, drug trafficking, public drunkenness, stolen vehicles, store break-ins and other crimes in the week prior to the protest. There were three reports of street crime since the protest began for mischief, robbery and auto theft. Police yesterday said data were incomplete.

“There have been no riots, injuries or deaths,” Police Chief Peter Sloly testified Wednesday at the Municipal Police Services Board. “We are arresting, charging and investigating bad actors.” All charges against truckers to date involved routine traffic violations or breach of a local noise bylaw for horn honking.

The Freedom Convoy’s attorney, Keith Wilson, has confirmed that the new donation site is with the Christian crowdsourcing site GiveSendGo, which has pledged not to deplatform the Freedom Convoy organizers.