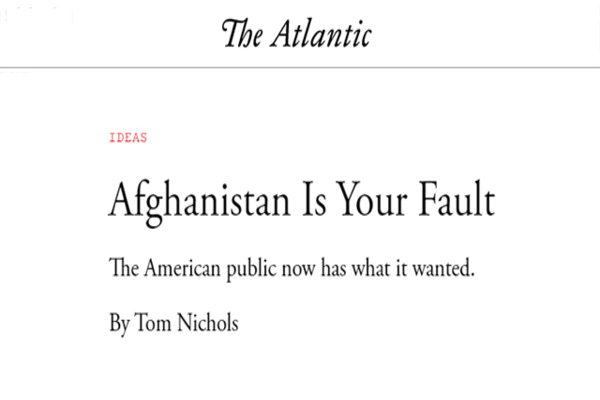 (IL) – The Atlantic editor-and-chief Jeffrey Goldberg, a neocon propagandist who helped lie America into forever wars in the Middle East, on Monday published an article from NeverTrumper Tom Nichols blaming the American people for the failure of the war in Afghanistan.

Afghanistan Is Your Fault

The American public now has what it wanted.

Kabul has fallen. Americans will now exercise their usual partisan outrage for a few weeks, and then Afghanistan, like everything else in a nation with an attention span not much longer than a fast-food commercial, will be forgotten. In the meantime, American citizens will separate into their usual camps and identify all of the obvious causes and culprits except for one: themselves.

Many Americans will bristle at the idea that this defeat overseas can be laid at their feet. When U.S. forces had to endure the misery of the retreat from North Korea back to the 38th parallel, no one made the argument that it had happened because of the voters. No one turned to the American people during the fall of Saigon and said, “This is on you.”

[…] After the worst attack on U.S. soil, Americans had no real interest in adult conversation about the reality of anti-terrorist operations in so harsh an environment as Afghanistan (which might have entailed a presence there long beyond 20 years), nor did they want to think about whether “draining the swamp” and modernizing and developing Afghanistan (which would mean a lot more than a few elections) was worth the cost and effort.

Maybe it would have been worth it. Or maybe such a project was impossible. We’ll never know for certain, because American political and military leaders only tried pieces of several strategies, never a coherent whole, mostly to keep the costs and casualties down and to keep the war off the front pages and away from a public that didn’t want to hear about it.

[…] But as comforting as it would be to blame Obama and Trump, we must look inward and admit that we told our elected leaders — of both parties — that they were facing a no-win political test. If they chose to leave, they would be cowards who abandoned Afghanistan. If they chose to stay, they were warmongers intent on pursuing “forever war.”