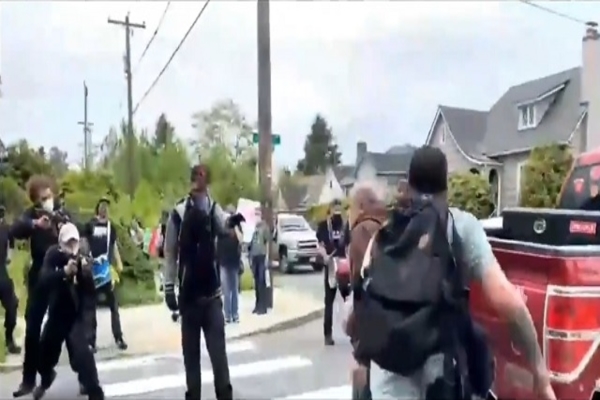 (informationliberation) – Videos out of Portland on Thursday show a gang of antifa militants armed with AR-15s and shotguns blocking streets in a suburban neighborhood and attacking drivers who refuse to follow their commands.

You can see in this video there was a school bus behind them:

“A person in another vehicle blocked by the crowd near North Alberta Street and North Michigan Avenue got into a dispute with people who surrounded him and took a firearm from him, as well as tools and keys,” Portland Police said in a statement on the incident.

There were multiple such attacks.

These videos of the same two incidents are a bit longer but they’ll probably get deleted by YouTube:

Rest assured, police are ready and willing to act… to arrest antifa’s victims.

Portland Mayor Ted Wheeler said two weeks ago he was going to go to war with antifa but it doesn’t appear like he has made much progress.

Antifa (or some intersectional FBI agent) responded by releasing a video doxing his home address and threatening to kill him.

The FBI is too busy hunting down grandmothers for “trespassing” in the Capitol building four months ago to do anything about antifa’s multi-year long insurrection in Portland.