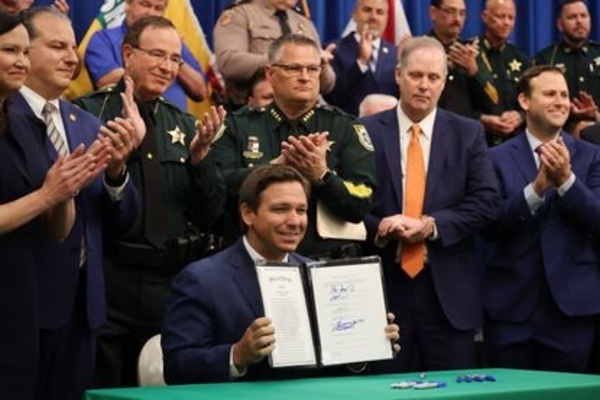 Florida Gov. Ron DeSantis (R) signed an election integrity bill, SB 90, on Thursday, which implements a number of safeguards to protect elections in the Sunshine State, including limits on ballot box drop boxes, enhancements on voter ID requirements, and additional restrictions on voting by mail and ballot harvesting.

The Republican governor signed the bill into law during an exclusive broadcast on Fox & Friends.

“Me signing this bill here says, ‘Florida, your vote counts. Your vote is going to cast with integrity and transparency, and this is a great place for democracy,’” DeSantis said:

The bill itself prohibits the mass mailing of ballots — a point of national contention in the 2020 presidential election — while banning ballot harvesting, strengthening voter identification, and preventing “private money from administering elections in our state,” per a summary from the governor’s office:

The proposal strikes a reasonable balance for families and those in elder care facilities while simultaneously banning ballot harvesting by political operatives. Under this law, a person may not handle more than two ballots other than those of immediate family members. There is an exemption for ballots collected during supervised voting at assisted living facilities and nursing homes to make sure no undue burden is caused for Florida’s most vulnerable.

The proposal bans the mass mailing of ballots, ensuring that vote-by-mail ballots are only sent to the individuals that requested them, and only if requested for each election cycle they intend to vote by mail. The bill also increases election transparency, allowing each political party and candidate guaranteed access to observe signature matching reviews by the canvassing board, and allows for appointed watchers on their behalf.

“Florida took action this legislative session to increase transparency and strengthen the security of our elections,” DeSantis said in a statement. “Floridians can rest assured that our state will remain a leader in ballot integrity.”

Elections, he continued, should be “free and fair,” adding the changes will “ensure this continues to be the case in the Sunshine State.”

Senate President Wilton Simpson (R) recognized Florida as a “model for the nation” in the last election and explained SB 90 effectively codifies provisions of DeSantis’s executive order “that were largely credited as a reason Florida’s 2020 general election went so smoothly, and why results were available much quicker in Florida than in many other states.”

SB 90 originally passed in the Senate 23-17 and the House 77-40. Election integrity advocates, including Heritage Action, have already praised the measure.

“These measures, which Heritage Action advocated for and partnered with thousands of grassroots activists to support, will help ensure it is easy to vote and hard to cheat in Florida,” Executive Director Jessica Anderson said.

Democrats panicked following the legislature’s passage of the bill, with state Rep. Omari Hardy, a Democrat, referring to the measure as the “revival of Jim Crow in this state.”