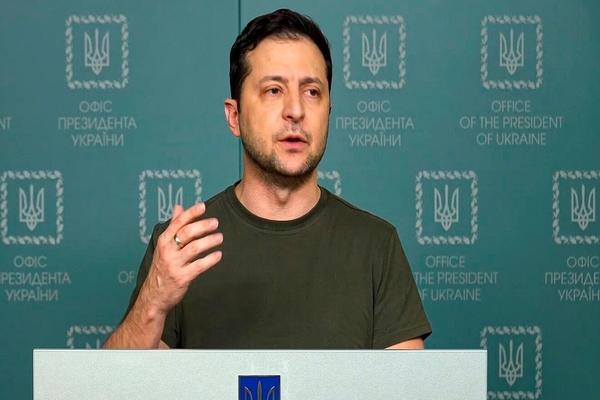 (breitbart) – Ukraine’s President Volodymyr Zelensky has announced the banning of Ukraine’s main opposition party and ten others as part of an anti-Russian crackdown.

The foremost victim of the crackdown is the Opposition Platform — For Life, which as of the 2019 general election was the second most popular political party in Ukraine after Zelensky’s own Servant of the People party — named after the television show of the same name which starred Zelensky as an ordinary man who became President, shot to fame by a channel run by the controversial Ukrainian-Israeli oligarch Ihor Kolomoisky.

The ban was announced on Sunday, and will suspend the operation of the party, which earned 13 per cent of the national vote in 2020 and is most successful in areas of Ukraine with large ethnic Russian and Russian-speaking populations, along with the other, predominantly leftist-branded parties named in the decree.

“The activities of those politicians aimed at division or collusion will not succeed, but will receive a harsh response,” President Zelensky is reported as saying by Ukrajinska Pravda.

All of the parties banned in the country — which has previously been described as “democratic” by U.S. President Joe Biden — have been considered Eurosceptic, anti-liberal, or pro-Russian by the Zelensky government, according to Der Spiegel.

Despite growing up as a Russian-speaker himself and polling well among that segment of Ukraine’s population prior to taking office, this is not the first time Zelensky has taken action against groups deemed to be pro-Russian.

The current government previously put Platform for Life party leader Viktor Medvedchuk under house arrest in May 2021 over accusations that he committed high treason, with authorities alleging the opposition leader had been handing over military secrets to Russia.

“With the help of legal instruments, Medvedchuk was deprived of the opportunity to use the media and state property to openly attack the country and cause ruinous damage to state security,” Zelensky said by way of justification for his actions.

Western nations have also targeted Russia-linked media since Vladimir Putin escalated hostilities in Donbas into full-scale war, with both the European Union and United Kingdom taking measures to ban the distribution of content produced by Russian state-owned broadcaster RT, for example.

Meanwhile, Russia has experienced its own, even harsher crackdown on those voicing opposition to the war, with thousands reportedly being arrested by the country’s police for protesting against the conflict and people spreading what the state deems “fake” information threatened with significant prison sentences.

“The screws are being fully tightened,” said one human rights NGO active in the country. “Essentially, we are witnessing military censorship”

Editor’s Note: This article has been updated to include a link to President Zelensky’s decree and list the parties named in it in full.