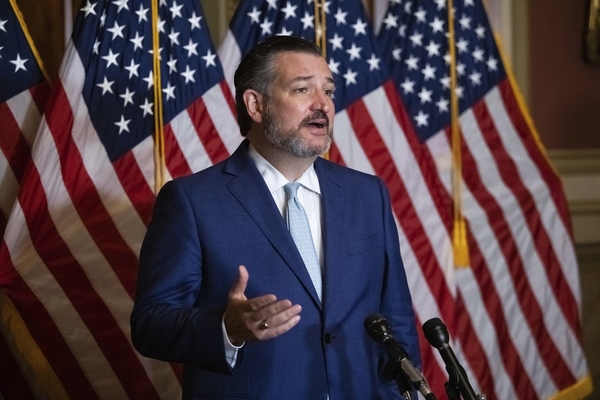 (breitbart) – Sen. Ted Cruz (R-TX) slammed the Democrats’ election takeover bill, known as the For the People Act, which he called the “single most dangerous piece of legislation” in Congress during the Senate Republican press conference on elections and voting rights legislation.

The Democrats’ election take-over bill has been dubbed the Corrupt Politicians Act by some Republicans, including Cruz, due to the “brazen power grab” Democrats are trying to have on the voting rights of Americans. Cruz went as far as to say it is the “single most dangerous piece of legislation pending in the United States Congress,” since the Democrats are looking to “federalize elections and to ensure that Democrats cannot lose for the next 100 years.”

Cruz said further that, by doing this, the Democrats are “taking away the right to vote from the citizens and giving it instead to the corrupt politicians in Washington.” He continued to say the legislation would ultimately “strike down virtually every common-sense voter integrity law adopted by the states across the country.”

The Texan also pointed out that 29 states have already adopted voter ID laws. This legislation would repeal the “reasonable, common-sense steps to protect the integrity of elections,” Cruz said. Additionally, the law would strike down the laws that 31 states have to prohibit ballot harvesting, the “corrupt practice of paying political operatives to collect other people’s ballots that invite voter fraud.” The law would mandate ballot harvesting nationwide.

The Republican Senator continued with his analysis of the legislation:

Now the Democrats claim that’s not their intention at all, except the bill explicitly provides that the millions of illegal aliens who are registered to vote and the people who register them shall not be liable for illegally registering to vote. Not only that many states have reasonable restrictions on felons and criminals voting.

The Corrupt Politicians Act strikes down all of those restrictions and mandates instead that all felons be allowed to vote. Beyond that, this bill is welfare for politicians. This bill is designed to give hundreds of millions of dollars to corrupt incumbent politicians to keep them in power. And this is not about the right to vote when you have millions of illegal aliens registered to vote.

“When you have felons registered to vote, when you’re inviting voter fraud through striking down photo ID laws through striking down-ballot harvesting laws,” Cruz continued, “What you’re doing is stealing the right to vote from legal citizens. This is brazen. It’s cynical. And it’s worth noting that when Republicans had the White House in both houses of Congress, we didn’t try this.”

“[Republicans] didn’t try to rig the system so that our side could never lose an election,” he expressed. “This is an abuse of power from the Democrats. And I got to say at least so far: the media has not covered even a fraction of the brazen abuse that is reflected in this bill.”