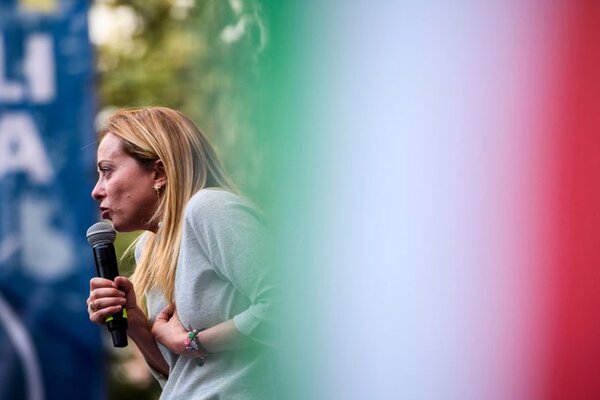 (breitbart) – The Italian centre-right coalition led by Giorgia Meloni is projected to win a majority of seats in the Italian Chamber of Deputies and the Senate after her Brothers of Italy (FdI) party came first in Sunday’s national vote.

The centre-right alliance, which also includes populist Matteo Salvini’s League and former prime minister Silvio Berlusconi’s Forza Italia, won 43.8 per cent of the popular vote, with Meloni’s FdI winning the largest share of the vote at 26 per cent, well ahead of the left-wing Democratic Party who came in second with 19.1 per cent.

Seat projections resulting from the election give an estimate that the centre-right will control anywhere from a majority of 109 to 129 seats in the Italian Senate out of a total of 200, while the coalition is also expected to win between 220 to 258 seats in the 400 -seat Chamber of Deputies, Il Giornale reports.

The opposition leftist bloc, which includes the second-place Democratic Party, is projected to win just 30 to 50 seats in the Senate and 66 to 100 seats in the Chamber of Deputies.

Following her historic election win that could make her the first female Prime Minister in Italian history, Giorgia Meloni gave a victory speech highlighting her thanks to her supporters saying, “Italians have sent a clear message in favour of a right-wing government led by Brothers of Italy,” and holding a sign stating “Thank you Italy.”

“This victory is dedicated to all the militants, leaders, supporters and to every single person who – in recent years – has contributed to the realization of our dream,” Meloni wrote on social media and added, “To those who, despite the difficulties and the most complex moments, have remained in their place, with conviction and generosity. But, above all, it is dedicated to those who believe and have always believed in us.”

League (Lega) leader Matteo Salvini reacted to his coalition’s win on Sunday night saying that the alliance had a clear advantage in both houses of parliament, while Forza Italia member and former European Parliament President Antonio Tajani stated, “We have shown that we are the centre. We do not make controversies with the allies, we go ahead with our choices, which have been rewarded. The numbers that we will have in Parliament make us a decisive force for the Government.”

Reactions in other parts of Europe have been far less enthusiastic about a possible Meloni-led government, with French Prime Minister Elisabeth Borne telling broadcaster BFMTV that the European Union would be watching the situation closely for any possible “human rights” violations.

“In Europe, we have a set of values ​​and, of course, we will be mindful that these values ​​are respected by everyone when it comes to human rights and the right to abortion,” Prime Minister Borne said.