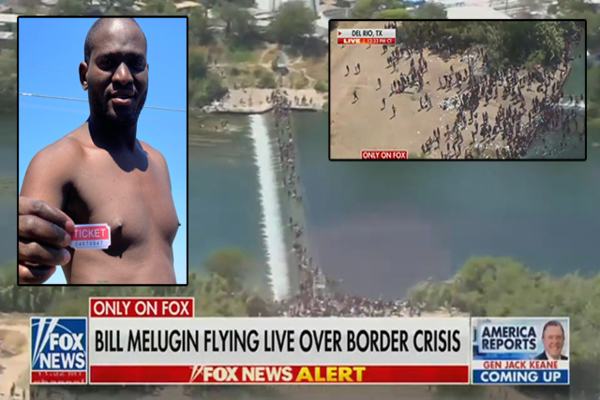 (IL) – Local police on Friday fought back against the Biden regime’s attempt to block the American people from witnessing the flood of over 11,000 Haitian migrants illegally crossing our southern border and gathering under the Del Rio International Bridge to file fraudulent “asylum” claims.

After the FAA ordered Fox News not to fly their drone over the area, the police decided to take them up on their helicopter to show the public the monumental crime that’s occurring.

A CIS reporter on the ground said the majority of the migrants are Haitians who were living safely in Chile but journeyed to the US after Biden and his handlers threw the border wide open and offered Haitians golden tickets to asylum and heaps of welfare.

The FAA said last night after facing backlash that they would allow the media to call them and “make requests to operate in the area.”

Fox was granted permission to fly their drone earlier today:

CIS’s Todd Bensman went down to the border to interview the migrants coming in and reported that most if not all of the Haitians were actually living safely in Chile without issue and only came here after hearing Biden threw the borders wide open to them and promised them welfare.

This video is stunning:

While Americans are being told they need to be vaxxed to have a job or go to school and need to show their vax passport to go to a restaurant, illegal aliens are being encouraged to illegally invade our southern border and being told they don’t have to take the jabs and will get endless welfare!

This is a crime against the American people and absolute treason! We are ruled by people who literally hate us with an undying passion!