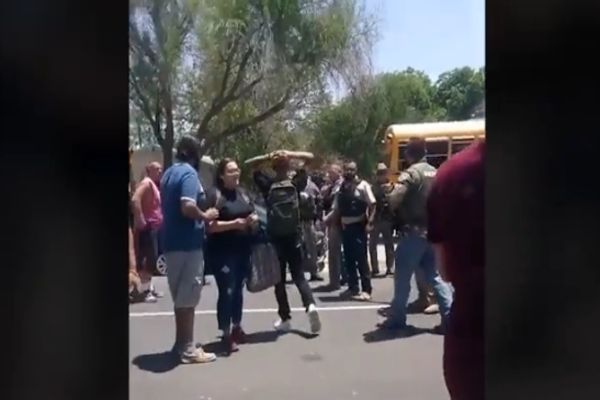 (breitbart) – A lone gunman stormed into a Uvalde, Texas, elementary school Tuesday morning with multiple firearms and hundreds of rounds of ammunition intent on killing students. From his approach to the school until his death at the hands of law enforcement, police engaged the man to save as many lives as they could.

A law enforcement source described the scene at the Robb Elementary School campus on Wednesday, telling Breitbart Texas the rapidly developing tragedy involved multiple agencies banding together in impromptu fashions. The source says a Border Patrol agent, a member of the agency’s elite BORTAC tactical team, engaged with the shooter and formed a team with other authorities to push into the gunfire and neutralize the suspect.

The following is what is currently known about the timeline of events. As the investigation unfolds, specific details may emerge providing additional insights.

The source told Breitbart that law enforcement from local, state, and federal agencies rushed to Uvalde as calls for assistance went out from local counterparts. At roughly 11:50 a.m. on Wednesday, local authorities were already engaging the suspect outside the school.

Despite their efforts, the suspect gained access through a doorway shortly after the initial confrontation with police.

Officers continued to exchange gunfire with the suspect barricaded himself inside the school, the law enforcement official told Breitbart. The shooter repelled the officers using a cache of ammunition and a rifle. The source said authorities recovered a backpack containing fully loaded rifle magazines for an AR-15-style weapon. The suspect was believed to be carrying two backpacks.

At least one student was able to call 911, the source added. The student’s young age did not stop them from providing some information to authorities about the number of gunshots heard.

As authorities engaged the suspect and attempted to end the attack, word quickly spread through the small town. Groups of parents and relatives converged on the scene. According to the source, the parents and family members attempted to rush into the campus in a state of panic. Multiple law enforcement officers expended their efforts to calm the families and keep them safe from harm.

Other officers, according to the source, rushed to parts of the building breaking windows and escorting students and faculty out of harm’s way. A hastily set up command center at a nearby funeral home served to coordinate more resources. From there, all available emergency medical resources were requested and staged to respond once the school was secured.

During the chaos, law enforcement officers moved students to safety and kept family members at bay. Meanwhile, an ongoing exchange of gunfire with the suspect continued and a plan was hatched by a Border Patrol agent to storm the barricade to end the incident. According to the source, the as-yet-unidentified Border Patrol agent assisted in organizing a team of officers already on the scene who had received tactical training.

Ultimately, the team breached the classroom where the suspect barricaded himself and exchanged close-quarters gunfire with the suspect. The gunman shot the Border Patrol agent during the exchange. The agent kept his composure and managed to fatally shoot the suspect, bringing the attack to a close.

Although local authorities had summoned SWAT teams and a hostage negotiator, those resources did not arrive before the makeshift team ended the situation, according to the source.

The source told Breitbart Texas that officers on the scene were horrified at the carnage they witnessed and immediately turned their focus to life-saving measures. Incident commanders summoned all available EMS technicians into the building and called for air evacuation helicopter crews.

The Border Patrol agent who neutralized the suspect sustained a gunshot wound to his foot or lower leg and was treated and released shortly after the incident. The suspect managed to kill 19 students and two adult teachers at the campus during the horrific attack. In addition, according to the source, more than one dozen suffered gunshot injuries, and some remain hospitalized.