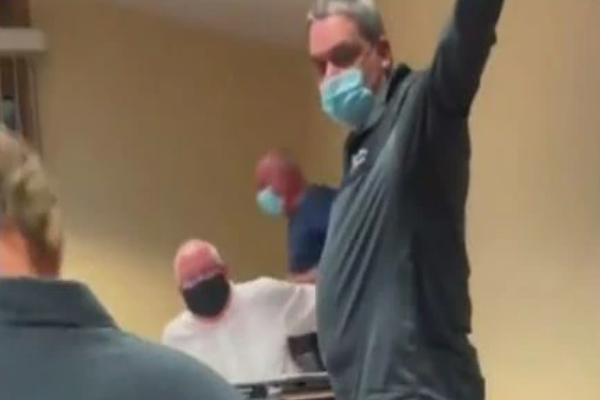 (bigleaguepolitics) – An Indiana school board meeting turned hostile after a parent confronted a board member on continued abusive mask mandates on children in the schools.

“What? What’d you say? Did you call me an idiot?” Troxell was seen yelling at Greer, who remained seated. Troxell then aggressively charged towards Greer before being restrained by a school resource officer.

Greer provided his account in a statement to 13News:

“During the board meeting I provided a demonstration with an oxygen meter proving that per OSHA standards our kids are breathing unsafe levels of oxygen due to the mask mandate in our school. Mr. Troxell asked a follow up question. I attempted to answer but he was unwilling to listen. At which point I said, ‘You’re not even trying to understand.’ He said, ‘I don’t want to listen because you don’t make sense.’ I replied with, ‘You’re an idiot.’

At which point he attempted to physically assault me but was restrained by three board members and an officer. I was seated this whole time and showed no aggression. At which point the officers escorted me out but allowed the aggressor to stay. He called me an a—— and a bastard. He then threw a temper tantrum and his papers. He attempted to quit but the board members asked him to sit down and stated ‘No, we need you.’

The meeting continued after I was escorted out and he continued to be combative and dismissive to other parents who spoke. His eyes were even closed at one point.”

“I’m tired of that stupid bastard,” Troxell said in the video.

Troxel continued the profanity-filled rant after Greer was removed from the meeting, saying that he won’t “put up with this s— no more,” and that he will not “stay [t]here and be called an idiot by some dumbass.”