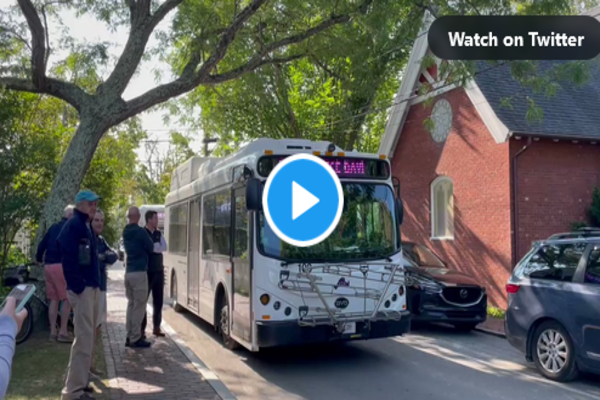 (breitbart) – After declaring a “humanitarian crisis,” the outcry from Martha’s Vineyard over just 50 illegal alien arrivals has prompted Gov. Charlie Baker (R) to deport the group from the elite island off the coast of Massachusetts to a nearby military base.

As Breitbart News estimates, the island could house about six million illegal aliens.

Democrat officials on Martha’s Vineyard immediately declared a “humanitarian crisis” even as the 50 illegal alien arrivals are a drop in the ocean compared to the nearly 6,000 border crossers and illegal aliens that American border towns are subjected to every day.

In response, Baker bused the illegal aliens off Martha’s Vineyard to Joint Base Cape Cod following Democrats’ outcry that DeSantis’ flying illegal aliens to the elite island was “evil and inhumane” even as President Joe Biden buses and flies thousands of illegal aliens every day to working and middle class communities.

Residents on the island voted up to 88 percent for Biden in the 2020 presidential election.

“… [Joint Base Cape Cod] can provide dedicated space for access to legal services and other essential services such as basic healthcare,” Baker said in a statement, noting that the illegal aliens will live in “dormitory-style spaces.”

Baker is also deploying about 125 members of the Massachusetts National Guard to aid the illegal aliens arriving at Joint Base Cape Cod.

The move comes as the Biden administration is reportedly reviewing “legal options” against Republican governors who are sending border crossers and illegal aliens to Democrat havens rather than keeping them in their states.

Baker also claimed that Martha’s Vineyard is “not equipped to provide sustainable accommodation” to illegal aliens. Wealthy residents, though, leave their summer homes on Martha’s Vineyard in the autumn and winter months — providing excess shelter space for new arrivals.

“Most of those multi-million dollar mansions are summer homes that are vacant most of the year,” Christina Pushaw, a spokeswoman for DeSantis’s re-election campaign, said. “They can be used to house thousands of illegal migrants. Time to walk the walk, Biden voters.”

The Obamas, for instance, do not live primarily at their vacation home in Martha’s Vineyard. Instead, the family spends most of their time at their primary residence in Washington, DC — an $8.1 million estate in the exclusive Kalorama neighborhood.

On Martha’s Vineyard, the Obamas’ property boasts 29 acres, a private beach, seven bedrooms, and eight and a half bathrooms. The residence alone could likely house up to 15 newly arrived illegal aliens while the acreage could house the remaining 35 illegal aliens in makeshift facilities.