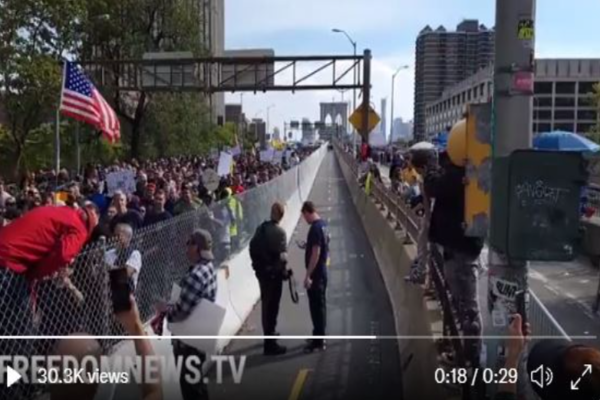 (bigleaguepolitics) – Medical tyranny has continued to propagate in New York state and especially NYC following massive initiatives to force experimental shots on Americans who do not want them. A recently announced mandate by the city of New York’s mayor Bill de Blasio implicates nearly all public employees into this push, including firefighters, police, EMS, teachers, and others.

Also featured by the group was timelapse footage put together by RSBN network showing just how massive a pro-freedom anti-mandate crowd in New York City had gotten during a march. The slowed-down clip shows footage panning through a seemingly endless line of marching American patriots for about a minute and a half.

Marchers were seen chanting “USA! USA! USA!” throughout the event.

The deadline for vaccination for thousands of New York City municipal workers to take the COVID-19 shots including firefighters, police officers, teachers, and sanitation workers, is reportedly set for 5 pm on October 29.

“There’s a lot of people here,” Joe DiGiacomo, a protestor seen at today’s event said to a camera. “De Blasio, you better make up your mind.”