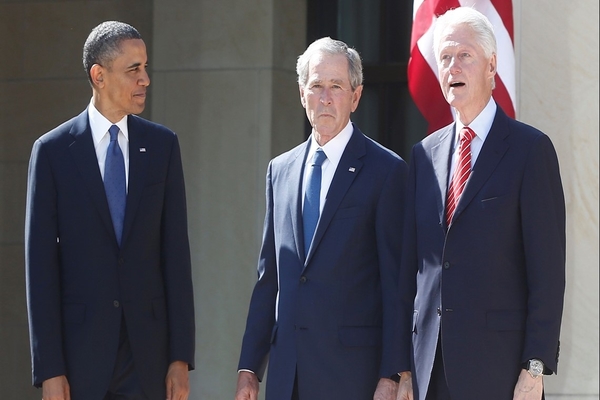 (breitbart) – President Joe Biden is looking to team up with former Presidents Bill Clinton, George W. Bush, and Barack Obama, as well as multinational corporations, to bring Afghans to the United States for permanent resettlement.

This week, former officials with the Clinton, Bush, and Obama administrations launched the organization Welcome.us which will work with multinational corporations like Airbnb, Walmart, Starbucks, Instacart, Facebook, Microsoft, and Chobani to provide financial support to Afghans arriving in the U.S. as part of Biden’s massive resettlement operation.

Biden has said he hopes to resettle about 95,000 Afghans across the U.S. over the next 12 months. In a 21-day period from August to September, Biden brought more than 48,000 Afghans to the U.S. for resettlement — a population more than four times that of Jackson, Wyoming.

Instacart is donating 25,000 “culturally appropriate grocery meals” to Afghans arriving in the U.S. while Walmart donates $5000,000 in grant money to Welcome.us. Facebook is giving Welcome.us $150,000 in ad credits.

Starbucks has pledged $350,000 in grants to “nonprofit organizations supporting Afghan Special Immigrant Visa (SIV) applicants and refugee resettlement” while Microsoft executives have said they will give $1 million in “cash, technology, and services to support the evacuation and resettlement of refugees.”

“America is at a critical moment in our history — it is our duty to recognize our common humanity and welcome refugees from Afghanistan with open arms,” Chobani CEO Hamdi Ulukaya said in a statement.

Clinton, Bush, and Obama, as well as former First Ladies Hillary Clinton, Laura Bush, and Michelle Obama, are serving as honorary co-chairs to Welcome.us. The organization is being backed by Rockefeller Philanthropy Advisors which has ties to billionaire George Soros’s Open Society Foundation.

The Bushes said in a statement:

Thousands of Afghans stood with us on the front lines to push for a safer world, and now they need our help. We are proud to support Welcome.US and the work to help Afghan families get settled and build new lives. We stand ready to show our new Afghan neighbors and the rest of the world how a welcoming and generous spirit forms the backbone of what makes our country so great.

The plan being put together by the State Department would allow private companies, advocacy groups and local communities to directly support — and even bring in — refugees, according to conversations with multiple advocates familiar with it. [Emphasis added]

The policy details are still being worked out by the State Department, including how many people are required to sponsor a refugee and how much private resettlement could happen without oversight from refugee agencies. [Emphasis added]

Welcome.us, according to Axios, is providing a gateway for the Biden administration to set up a privatized refugee resettlement operation where corporations can seek out refugees to fill American jobs.

As Breitbart News reported, the Afghan population in the U.S. has exploded in recent years. Before the Afghanistan War began in 2001, just 44,000 Afghans resided in the U.S. By 2019, that total had more than tripled to 133,000.

While the Afghan population in the U.S. has grown significantly, so has the number of Afghans living on welfare and near the poverty line. For instance, more than 65 percent of households headed by Afghan immigrants use at least one major form of welfare.

Likewise, the number of Afghan immigrant households that live in or near the U.S. poverty line is close to 51 percent. This is significantly higher than that of households headed by native-born Americans, where about 27 percent live in or near poverty.

Over the last 20 years, nearly a million refugees have been resettled in the nation — more than double that of residents living in Miami, Florida, and it would be the equivalent of annually adding the population of Pensacola, Florida.

Refugee resettlement costs American taxpayers nearly $9 billion every five years, according to research, and each refugee costs taxpayers about $133,000 over the course of their lifetime. Within five years, an estimated 16 percent of all refugees admitted will need housing assistance paid for by taxpayers.