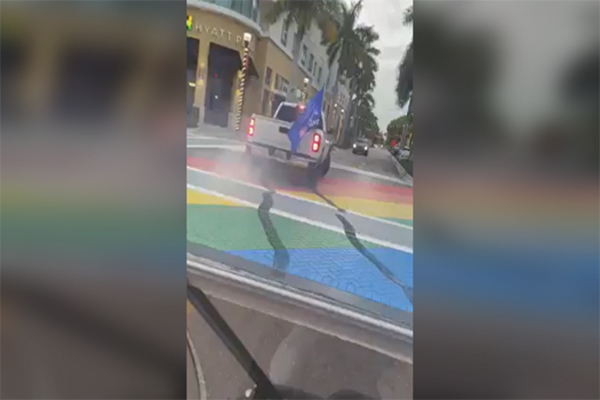 (IL) – A Florida man has been charged with a felony for doing a burnout on an “LGBTQ Pride” painted crosswalk in Delray Beach and may face even more charges under the terribly written anti-rioting act Ron DeSantis recently signed into law.

A Florida man has been slapped with felony charges for leaving tire tracks across an intersection painted in the rainbow colors of the LGBT pride movement. LGBT activists cheered the police for throwing the book at the suspect.

Alexander Jerich, 20, turned himself in to police in Delray Beach, Florida, on Thursday. Jerich was seen on Monday allegedly pulling onto the intersection in a pickup truck and spinning his rear tires for around 15 seconds, leaving black streaks across the rainbow stripes and sending clouds of smoke into the air.

Jerich was taken to Palm Beach County Jail. Local media reported that he was charged with criminal mischief over $1,000, reckless driving, and evidence of prejudice, the latter of which elevated the charges against him from misdemeanor to felony.

CBS Miami reported that the “street art” cost $16,000 and was “paid for by the Palm Beach County Human Rights Council and the AIDS Healthcare Foundation.”

Imagine getting $16,000 to paint a few lines on a crosswalk.

Local LGBT activists piled on Jerich. The Palm Beach County Human Rights Council told local media that they “requested the charges include defacing a memorial – a recently enacted law which would require this crime to be treated as a felony. If convicted of this offense, the perpetrator would be responsible for reimbursing the City of Delray Beach for the cost of repairing the damages in addition to the severe penalties for committing a felony.”

Ironically, Jerich may be charged under Florida’s ‘Combating Public Disorder Law,’ which makes it a third-degree felony if someone “willfully and maliciously defaces, injures, or otherwise damages by any means a memorial or historic property.” The law was signed by Governor Ron DeSantis in April, and cheered by conservatives who opposed leftist rioters’ destruction of statues and memorials during nationwide ‘Black Lives Matter’ protests.

Here’s an excerpt of the terribly written law.

Note it makes no mention of specifically protecting Confederate monuments (DeSantis called for tearing one down in 2019) — which were BLM/Antifa’s number one target but does further criminalize vandalizing LGBT “flags,” “paintings” and the Florida Holocaust memorial.

Was the bill just a bait and switch?

Was this the purpose of the bill from the very start?