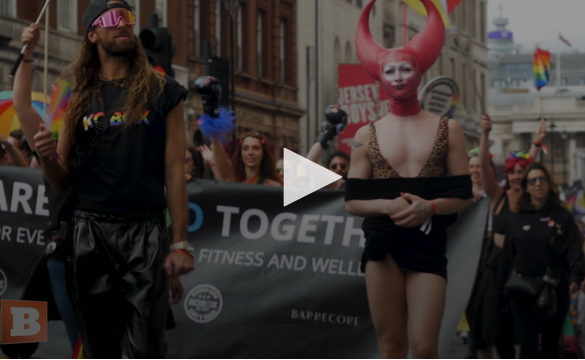 (breitbart) – Members of once neutral institutions in Britain, such as the Metropolitan Police, National Health Service (NHS), Fire Brigade, and the Armed Forces joined in with the crowds at the annual Pride Parade in London.

Marking the 50th anniversary of Pride Parades in London on Saturday, swaths of government employees joined with woke corporations, drag queens, and men in leather dog masks to demonstrate their LGBTQ bona fides.

In an exclusive video from Breitbart London, members of the National Health Service (NHS), the London Fire Brigade and servicemen in the armed forces, including the Coldstream Guard, the Army, Navy, and Royal Air Force all took part in the Pride Parade on Saturday.

The Scouts, formerly known as the Boy Scouts prior to allowing girls into the association, also joined the Parade. While the youth organisation is not technically affiliated with the government, its chief patron is Queen Elizabeth II and the joint presidents of the association are the Duke of Kent Prince Edward and Kate Middleton, Duchess of Cambridge, the likely future queen consort.

Despite being asked by the organisers of the Pride Parade not to wear uniforms and represent the LGBTQ community, Breitbart London filmed two police officers with rainbow lapels and one with a gay pride flag painted on his face taking pictures with members of the crowd.

Prior to the parade, Pride in London demanded that uniformed officers refrain from joining the parade: “We work hard to strike a balance between the very real and legitimate concerns from members of our community and being as welcoming as we can. We agree that the police uniform undermines that balance, and as such we are aligned that it should not feature in our parade.”

An open letter organised by the Lesbians and Gays Support the Migrants and signed by the Gay Liberation Front, which organised the first parade in 1972, said that police should not even patrol the event in light of supposedly homophobic policing practices.

“The organised presence of police at Pride en masse provides a platform to an institution that represses us. Having a police presence at Pride as well as patrolling Pride, makes Pride unsafe for our community,” the letter stated.

Commenting on the policing for the event, London’s leftist mayor, Sadiq Khan said:  “I think it’s really important that anybody who’s from the LGBT community should be able to take part in this parade.

“I think the police have been sensitive to the issues raised by the community and there will be uniformed officers in and around Pride to make sure we’re all safe, to make sure this parade is a success.

“But, clearly, those taking part in the parade from the police service won’t be wearing the uniforms.”

In addition to the police, military, and healthcare workers, the London Pride Parade heavily featured major corporations, including Coca-Cola, which apparently hired a drag queen to promote their sugary drinks. Other corporations to take part in the LGBTQ+ event included Microsoft, Cisco, eBay, Marriott and Tesco.