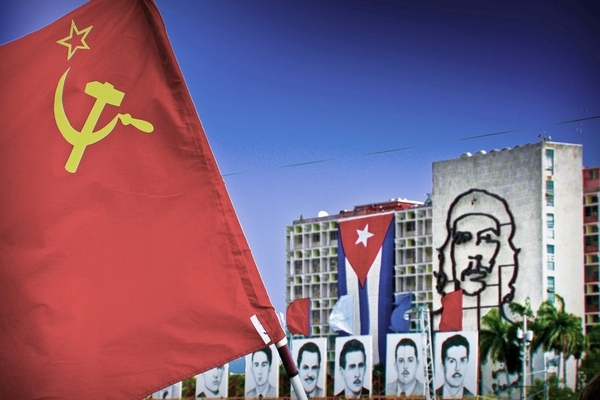 (breitbart) – Granma, the official newspaper of the Communist Party of Cuba, accused the United States on Thursday of “biological war” against the island after the State Department announced this week that Cuba would return to its list of state sponsors of terrorism.

The State Department noted the Castro regime regularly offers safe haven to American criminals and has for decades maintained ties to groups like Hezbollah, Iran’s Islamic Revolutionary Guard Corps (IRGC), and the Revolutionary Armed Forces of Colombia (FARC). The communist regime also celebrates as heroes spies like the “Cuban Five,” responsible for the deaths of four U.S. citizens in the 1990s.

The Cuban Ministry of Foreign Relations (Minrex) derided the designation as “fraudulent” and “hypocritical” in statements separate from the Granma screed.

“The imperial nation developed a cruel biological war against our country, sponsored attacks on defenseless populations, kidnapped and sank fishing vessels and, more recently, consistent with years of practice, maintained silence before a grave attack with long arms against the Cuban embassy in Washington,” Granma accused.

The latter is a reference to a lone Cuban national attacking the embassy in May. Police swiftly ended the attack and no one was injured.

It is not clear what incidents Granma is referring to regarding alleged abductions and a “biological war,” or attacks on “defenseless populations.” The state media article did not provide any other details to help readers identify what it was addressing.

Elsewhere in the article, Granma referred to the State Sponsors of Terrorism list as “spurious” and proof “once again of the cult of dies and double morality that characterizes the political acts of this administration,” referring to that of President Donald Trump. It also defined the Castro regime, and not the people it oppresses, as a “constant victim.”

The official statement from Minrex similarly insisted that Cuba, despite its decades of history aiding violent terrorist groups, was not a candidate for the list of state sponsors of terrorism.

“The Ministry of Foreign Relations condemns in the firmest and most absolute terms the fraudulent classification of Cuba as a State Sponsor of Terrorism, announced by the government of the United States in a cynical and hypocritical act,” the statement read. The list, it went on, “classifies countries, without a mandate or any legitimacy whatsoever, absent any genuine motive … and [used] as an instrument of defamation to apply coercive economic measures against nations that refuse to bend to the whim of the American empire.”

The declaration, it went on, “constitutes an arrogant act by a government that is discredited, dishonest, and in moral bankruptcy.” It concluded by accusing the United States of killing thousands of Cuban people, without specifying when these alleged killings took place.

Granma defended Cuba by claiming that it had received universal support around the world in light of the designation, but its article only cited rogue dictators like Venezuelan socialist Nicolás Maduro or discredited Obama-era pundits like Ben Rhodes, who supported Obama’s failed policies benefiting the Castro regime.

The Cuban Castro regime first appeared on the list of state sponsors of terrorism in 1982, after nearly a decade of violent intervention in Angola. President Barack Obama removed Cuba from the list in 2015 as part of his list of concessions to dictator Raúl Castro in a failed attempt to make the regime friendlier to human rights.

In the statement announcing Cuba’s return to the list on Monday, Pompeo accused the Communist Party of Cuba of “repeatedly providing support for acts of international terrorism in granting safe harbor to terrorists.”

“For decades, the Cuban government has fed, housed, and provided medical care for murderers, bombmakers, and hijackers, while many Cubans go hungry, homeless, and without basic medicine,” Pompeo said. “Members of the National Liberation Army (ELN), a U.S.-designated Foreign Terrorist Organization, traveled to Havana to conduct peace talks with the Colombian government in 2017.”

The Cuban regime also served as a mediator in peace talks between the Colombian government and the FARC, another Marxist terrorist group, resulting in a deal that granted FARC terrorists uncontested seats in Congress.

Outside of its region, Cuba has maintained longstanding ties with Iran that extend to its terrorist policies. Geopolitical experts have accused Cuba of maintaining ties to Hezbollah for decades. Reports accused Cuba of allowing the jihadist group Hezbollah to establish a center of operations in 2011. The Castro regime was also implicated in a scheme in which the government of Venezuela, which experts believe acts as a proxy for Havana, sold authentic passports to Middle Eastern nationals with no ties to Venezuela in exchange for bribes. Many of the purchasers are believed to have ties to jihadist groups, primarily Hezbollah.

Pompeo also noted that “Cuba also harbors several U.S. fugitives from justice wanted on or convicted of charges of political violence, many of whom have resided in Cuba for decades.”

Cuba joins Iran, Syria, and North Korea on the list, which imposes onerous sanctions on those states.