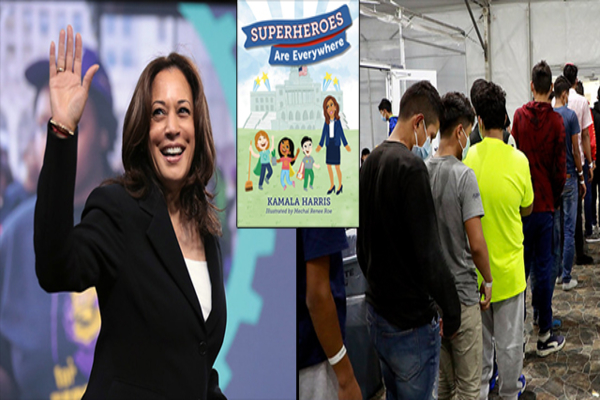 (informationliberation) – The Biden regime is flooding America with illegal immigrants and providing them with Kamala Harris’ book upon arrival, according to a new report from the New York Post.

Vice President Kamala Harris hasn’t been to the border to address a crisis she was tasked to help fix — but a children’s book she wrote is waiting there for young migrants who are being welcomed into the country.

Unaccompanied migrant kids brought from the U.S.-Mexico border to a new shelter in Long Beach, Calif., will be given a copy of her 2019 children’s book, “Superheroes are Everywhere,” in their welcome kits.

[…] “Whenever there’s trouble, superheroes show up just in time,” Harris tells kids in the book, shown sitting on a cot with more basic supplies at the Long Beach Convention & Entertainment Center, newly-converted to deal with the spiraling illegal immigration influx.
The Democrats are importing new voters and handing them Democrat propaganda upon arrival.

Remember how the ADL demanded Tucker Carlson be fired for speaking out against The Great Replacement?

Jonathan Greenblatt assured me this was a conspiracy theory!