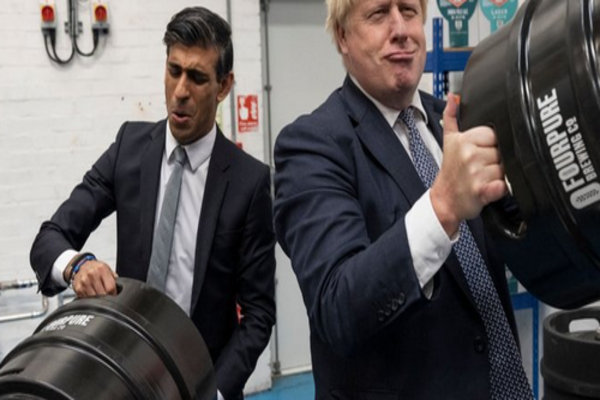 (breitbart) – Anyone hoping to become the next Prime Minister of the United Kingdom will have to convince nearly a third of Tory MPs to back them just to get into the election, and if only one candidate achieved this they will automatically be crowned winner on Monday, it has been revealed.

The officers of the 1922 Backbench Committee — in other words, the body which represents the majority of Conservative Members of Parliament who do not hold government posts, and which among other roles runs Tory leadership challenges — met Thursday afternoon to decide the rules of the coming competition to replace Liz Truss. Speaking to the press on the steps of the Palace of Westminster shortly afterwards, committee chairman Sir Graham Brady and party chairman Sir Jake Berry explained the revised rules they had devised.

Modified from the previous challenge which saw Liz Truss replace Boris Johnson in the summer, but which saw it drag on over six weeks in a process which was widely seen to have been damaging to both the party and the candidates involved, this competition will be done and dusted in little over a week at the most, and could even be completed by Monday, just four days from now.

One of the major changes is the threshold to join the competition, with the level being set at 100 MP supporters, considerably higher than the 20 in the summer vote. Back in July, eight MPs made the cut for the first round of voting. Now, needing 100 supporters out of a body of 357 sitting Conservative MPs, a maximum of three people could conceivably get onto Monday’s ballot.

Should that happen, nominations will close at 2 pm Monday afternoon, Sir Graham said, and Conservative MPs would immediately vote on those candidates: the two highest-scoring would then go to a fast, online vote of paid-up Conservative Party members in the wider country that week. A new leader would then be announced by Friday 28th.

Yet, three candidates at that stage presumes the 350-odd available votes are reasonably equally distributed between three candidates. Quite possibly, more people would put their names forward, and it’s conceivable that a wide field of would-be leaders could leave just one candidate able to hit that 100-support threshold.

In that case, Sir Graham confirmed, there would be no further steps. An MP with 100 colleagues in support and no opposing candidate hitting that threshold would be declared the winner and would quite possibly be made party leader that day. Assuming the King is in London, the handover of power from Liz Truss as Prime Minister to her successor could take place nearly immediately.

Another feature of the previous competition — countless televised debates — is to all but vanish this time. Assuming there are two candidates to make it through Monday, there will be a single broadcast debate, the party chairman said.

Explaining the logic of a super-high entry threshold for Monday’s vote, Sir Graham said: “A high threshold, but a threshold that should be achievable by any serious candidate who has a realistic prospect of going through. A threshold of 100 members of parliament nominating a candidate obviously allows for three candidates to potentially come forward.”

All minds will now, of course, turn to who could possibly be the next leader. Rishi Sunak, who came second in the last challenge, is an early favourite. Although the party members didn’t vote for him, he came first in the ballot of Tory MPs, and it is ultimately because of those MPs refusing to back Truss that we now find ourselves facing another election.

Yet the member’s favourite, polling says, is — and brace yourselves for this — former Prime Minister Boris Johnson. Just 15 weeks after he resigned Boris is now considered a favourite to lead again, is apparently flying back from holiday in theDominican Republic to campaign, and is already leading the count of declared supporters.

Speaking of declared supporters, Westminster intrigue blog Guido Fawkes is already doing the heavy lifting, as they invariably do, of tracking those Conservative MPs who have openly declared themselves for one candidate or another. It isn’t perfect: many will give their support privately and be known only to Sir Graham, and nobody has actually officially declared themselves to be standing yet.

Nevertheless at the time of publication, according to the Guido count, Boris Johnson has 32 MPs gone public with support, Rishi Sunak has 21, and Penny Mordaunt — who also stood at the last competition — has nine.

A long way short of 100 on all counts, but they have until Monday lunchtime to make it. Now for the bad news: as things stand, the chances of a solid ‘small-c’ conservative making the final ballot appears to be at zero. Rishi Sunak proved himself during his last period in government to be addicted to high taxes and high spending. Boris Johnson is at best a liberal and has never shown any inclination towards conservatism at any time he’s had power. Penny Mordaunt comes with a shining reference from Bill Gates and has a difficult relationship with her beliefs on whether ‘transwomen’ are actually men or women. Ben Wallace, also considered a possibility to run, is a war hawk at a time when the world needs fewer war hawks.

Still, at least confirmed conservative Kemi Badenoch is reportedly considering running. Though if the way the parliamentary conservative party has treated milquetoast centrist Liz Truss is anything to go by, the Tory Party would probably rather shoot itself into the sun before letting a full-fat conservative like Badenoch near the levers of power. Still, never say never…