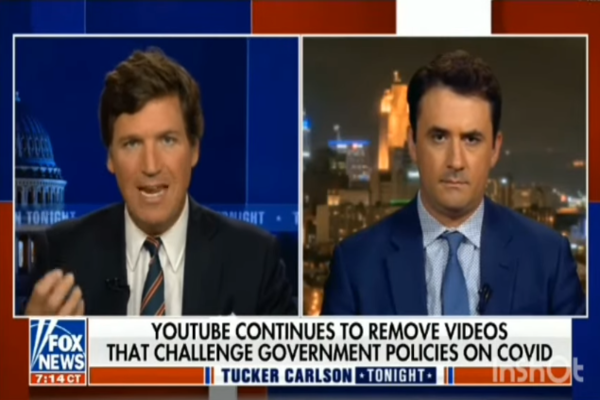 (breitbart) – Throughout the early stages of the COVID-19 pandemic and late into the 2020 election cycle, media and Democrats dismissed the possibility that China was responsible for the virus. In some cases, mainstream media and big tech censored those that suggested a China connection.

According to Breitbart editor-in-chief Alex Marlow, author of Breaking the News: Exposing the Establishment Media’s Hidden Deals and Secret Corruption, there are countless examples of the media giving China a pass, which he suggests was part of the effort to make then-President Donald Trump “the bad guy” instead of China.

CARLSON: Breitbart editor-in-chief, Alex Marlow is the author of “Breaking the News: Exposing the Establishment Media’s Hidden Deals and Secret Corruption.” He joins us tonight.

Alex, thanks so much for coming. This does seem — look, this is not political inherently, and speaking for myself, I would say this, no matter who is the President, someone I voted for, gave money to, and loved. It doesn’t matter. This is about public health.

How can you live in a country that doesn’t allow physicians to talk about the data they’re recording and observing about who is dying? I mean, what is this?

MARLOW: Yes, Tucker. Thank you so much for having me and thanks for the kind words about my book.

And when I started researching, and I took on this project for a year, I knew that the left and the media wanted to make Trump the bad guy when it came to coronavirus, not China, or anyone else for that matter, to make it about Trump. But the more I dug into it, the more I realized it was really about protecting corporate business models in China.

Where NBC — it is part of NBC Universal does huge business in China; ABC part of ABC Disney, huge business in China; Bloomberg, which we got into on your show last time I was here, but also the Silicon Valley tech giants. If they are not in China yet, they want to be in China someday soon. And we’ve already outsourced so much of our free speech to places like YouTube.

Now, we’re outsourcing our science to them. We were told that Johnson was kicked off because he defied the World Health Organization, the same World Health Organization that’s basically a subsidiary of China, Tucker. Why did Dr. Tedros, a guy who is not a medical doctor, how come he is the most powerful doctor in the world today? Well, he was China’s pick, even after he botched the response to a cholera outbreak in Africa. The list goes on and on.

CARLSON: You’ve got to wonder though, is there a point at which it just doesn’t work that everything that’s good about America is rooted in free speech, freedom of conscience, free inquiry? If we don’t have any of those things, then kind of what’s the point?

MARLOW: That’s my feeling as well, which is why it’s so good to see independent outlets sprouting up and people taking out on their own and trying to go around these tech censors. But as you correctly know, it is not enough just to build your own Twitter, because these places are monopolies, which is why it’s so important that people start using antitrust, thinking about breaking up these companies.

But when they are trusting PolitiFact and Mark Zuckerberg with their science and not the actual doctors, we know that the system is broken, and now it’s potentially costing lives.

CARLSON: Yes, that’s why they are going to get people killed with this. It looks that way.

Alex Marlow, I appreciate your coming on tonight. Congrats on the book. Prescient, it turned out.