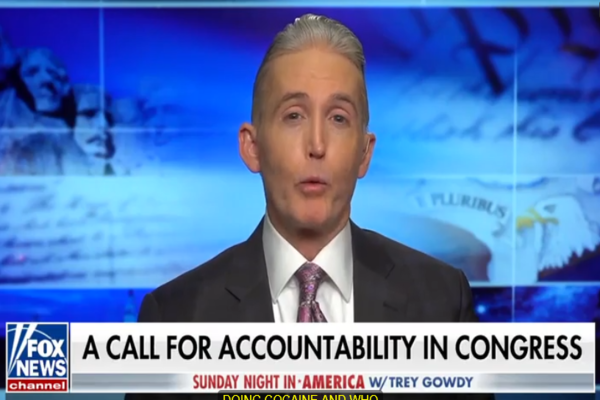 TREY GOWDY: My question for the congressman is simply this: Who? Give us the names. If you’re being invited to cocaine parties by colleagues, tell us who invited you? Who used illicit drugs in front of you? Who broke the very laws they passed, and expect to us follow? Which of your colleagues believes he or she is above the law? Who is doubling as a deviant by night while talking about family values by day? …The good ones don’t make the news, The bad ones get all of the attention. This modern obsession with negativity does not need to be enhanced by exaggeration.

I was in DC for eight years, and the people I associated with it were nothing like what this congressman described. Tim Scott’s idea of a wild time was ordering dessert… Kevin McCarthy did take to us see movies, and one time, he did order butter popcorn if that counts. Joe Kennedy’s nickname was ‘milk,’ because It was the strongest thing he drank…Jason Chaffetz didn’t need milk because he didn’t even drink coffee.

Either tell us who you saw doing cocaine and who invited you to sexually explicit parties, or admit what we suspect, which is that you made it up. And then ask yourself where fairness and honesty fall on the list of qualities we should be looking for in members of Congress.