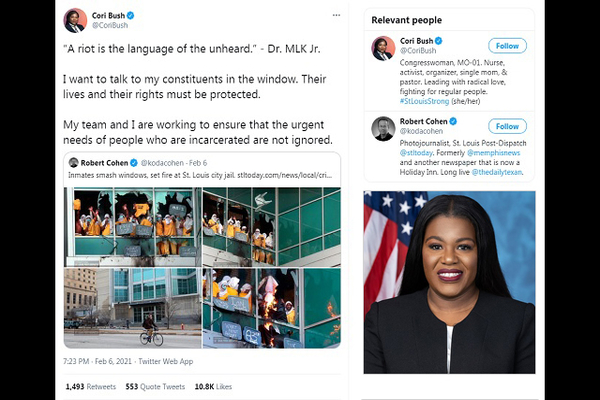 (informationliberation) – That was quick.

Missouri Rep. Cori Bush (D), whose district includes all of the city of St. Louis, voiced her support for a violent prison riot by criminal gang members over the weekend.

The rights of the “Ian Gang” must be protected!

From The St. Louis Post-Dispatch:

A faulty locking system allowed inmates at a downtown city jail to escape their cells Saturday before freeing other “very violent people” who then caused widespread damage on a floor of the jail, including smashing exterior windows and sending flaming debris to the sidewalk below, city officials said.

About 115 inmates took control of the fourth floor of the City Justice Center, where they set fires, clogged toilets, flooded parts of the floor and caused other damage, officials said.