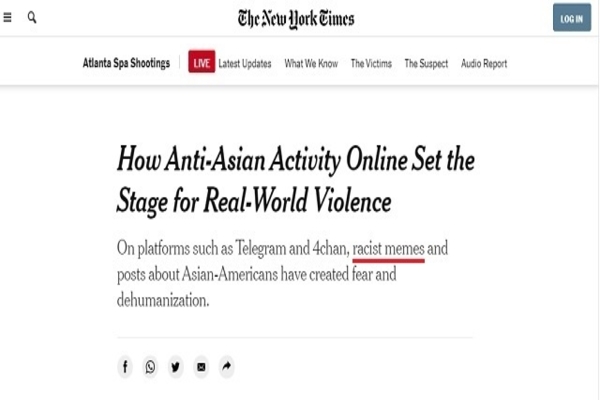 (informationliberation) – The spate of attacks on Asians in recent months is the fault of memes shared on Telegram and 4chan even though there’s no evidence proving that’s the case, so says the New York Times.

From the New York Times (Archive):

On platforms such as Telegram and 4chan, racist memes and posts about Asian-Americans have created fear and dehumanization.

In January, a new group popped up on the messaging app Telegram, named after an Asian slur.

This week, after a gunman killed eight people — including six women of Asian descent — at massage parlors in and near Atlanta, the Telegram channel linked to a poll that asked, “Appalled by the recent attacks on Asians?” The top answer, with 84 percent of the vote, was that the violence was “justified retaliation for Covid.”

The Telegram group was a sign of how anti-Asian sentiment has flared up in corners of the internet, amplifying racist and xenophobic tropes just as attacks against Asian-Americans have surged. On messaging apps like Telegram and on internet forums like 4chan, anti-Asian groups and discussion threads have been increasingly active since November, especially on far-right message boards such as The Donald, researchers said.

The activity follows a rise in anti-Asian misinformation last spring after the coronavirus, which first emerged in China, began spreading around the world. On Facebook and Twitter, people blamed the pandemic on China, with users posting hashtags such as #gobacktochina and #makethecommiechinesepay. Those hashtags spiked when former President Donald J. Trump last year called Covid-19 the “Chinese virus” and “Kung Flu.”

A search of Twitter for the hashtag #makethecommiechinesepay shows not one single result before this article came out.

A large portion of the results for #GoBackToChina link to a 2019 movie named “Go Back to China” about a “spoiled rich girl” blowing through her trust fund and having to go back to China to work for her family’s toy business.

Note, the Telegram channel Alba cites, according to her own claims, had just “hundreds” of followers.

The desperation here is remarkable. They’re looking for any excuse they can find to try and get Telegram and 4chan shut down.

While some of the online activity tailed off ahead of the November election, its re-emergence has helped lay the groundwork for real-world actions, researchers said. The fatal shootings in Atlanta this week, which have led to an outcry over treatment of Asian-Americans even as the suspect said he was trying to cure a “sexual addiction,” were preceded by a swell of racially motivated attacks against Asian-Americans in places like New York and the San Francisco Bay Area, according to the advocacy group Stop AAPI Hate.

They refuse to say who carried out those attacks.

The Network Contagion Research Institute, headed by Joel Finkelstein, says on its website it’s affiliated with the Anti-Defamation League, George Soros’ Open Society Foundations and the Charles Koch Foundation — all of whom are lobbying for internet censorship.

The ADL is the leading pro-censorship lobby in America.

Despite painting all Asians as victims of evil White oppressors, the Times made sure to put Asians in their place — lest they convince themselves they’re at the top of the victim hierarchy:

Anti-Asian speech online has typically not been as overt as anti-Semitic or anti-Black groups, memes and posts, researchers said. On Facebook and Twitter, posts expressing anti-Asian sentiments have often been woven into conspiracy theory groups such as QAnon and in white nationalist and pro-Trump enclaves. Mr. Goldenberg said forms of hatred against Black people and Jews have deep roots in extremism in the United States and that the anti-Asian memes and tropes have been more “opportunistically weaponized.”

But that does not make the anti-Asian hate speech online less insidious.

Sorry Asians, according to Mr. Goldenberg you’re pretty much at the bottom of the victim hierarchy!

After the shootings in Atlanta, a doctored screenshot of what looked like a Facebook post from the suspect circulated on Facebook and Twitter this week. The post featured a miasma of conspiracies about China engaging in a Covid-19 cover-up and wild theories about how it was planning to “secure global domination for the 21st century.”

This is the screenshot:

The Times failed to mention it was shared all over the place by leftists who wanted to try and link the shooting to their political enemies.