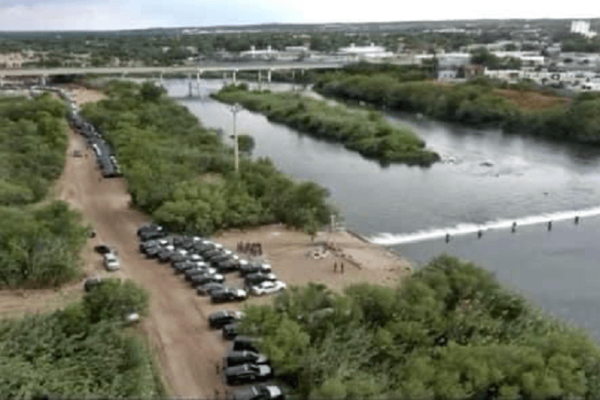 (breitbart) – EAGLE PASS, Texas — Texas Army National Guard troops and equipment deployed by Governor Greg Abbott moved in to block a portion of the Rio Grande in Eagle Pass, Texas. The troops began arriving on Friday and positioned themselves along a one-mile stretch of the river near the downtown area of the city.

The troops are stationed in Humvee vehicles carefully placed along the riverbank to serve as a deterrent to illegal crossings near the city. Nearly 30 vehicles are parked less than 150 feet from each other facing Mexico. Border Patrol agents in the area tell Breitbart Texas that more troops were scheduled to arrive later in the day.

As reported by Breitbart Texas, the area surrounding the ports of entry in Eagle Pass are known as high traffic areas for illegal crossings and are problematic for the Border Patrol due to the proximity to private residences in the city. Although many migrants choose to surrender hoping for quick release into the United States, many others, usually single adults, attempt to elude apprehension. Deterring migrants from crossing in the area prevents a quick escape into the populated areas within the city.

Governor Abbott utilized a similar tactic during the Haitian migrant crisis in Del Rio in September. Texas Highway Patrol troopers strategically placed vehicles along the river bank to prevent additional migrants from reaching the camp near a common crossing point in the area.

Dozens of Texas DPS Highway Patrol vehicles line up to stop the flow of migrants into the makeshift camp in Del Rio, Texas. (Photo: Texas Department of Public Safety)

A short distance away, construction crews are working to build Abbott’s border wall where the guard troops’ blockade ends. For two miles, the Texas border wall will stand 18’ tall and stretch along one of the busiest migrant crossing areas in Eagle Pass. A source involved in the construction tells Breitbart the project is progressing quickly. The source expects a state delegation to visit the construction site soon to observe the progress firsthand.

The National Guard deployment is part of Governor Abbott’s Operation Lone Star that has been in effect since March. The operation involves the deployment of more than 1,000 Texas Department of Public Safety Highway Patrol Troopers and 2,500 Texas Army National Guard soldiers to the border region across the state.

As of October 7, the operation has resulted in 6,799 criminal arrests, 1,195 migrant prosecution cases for criminal trespass, and more than 71,000 migrant apprehensions. The highway patrol has been involved in more than 800 pursuits since the inception of the operation.

Recent Operational Activities of note include: