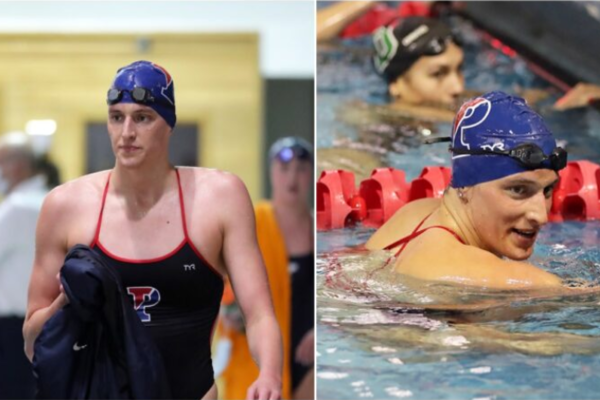 (bigleaguepolitics) – A University of Pennsylvania female swimmer is blowing the whistle about the perverted behavior of transgender swimming champion Lia Thomas in the locker room.

In the latest instance of civilization-destroying LGBT insanity, Thomas is winning swim meets as a biological man paired against biological women. Thomas is being celebrated as a hero and trendsetter by the media, even as “her” antics in the locker room cause women to feel uncomfortable and humiliated.

“It’s definitely awkward because Lia still has male body parts and is still attracted to women,” the whistleblower said to the Daily Mail.

Even though Thomas has a penis and testicles, “she” is allowed to masquerade as a woman and flaunt “her” male body parts in the locker room. All opposition to this madness has been swept under the rug in the name of tolerance and equality.

“Multiple swimmers have raised it, multiple different times,” the UPenn swimmer added regarding opposition to Thomas being included on the female swim team. “But we were basically told that we could not ostracize Lia by not having her in the locker room and that there’s nothing we can do about it, that we basically have to roll over and accept it, or we cannot use our own locker room.”

“It’s really upsetting because Lia doesn’t seem to care how it makes anyone else feel,” the swimmer added. “The 35 of us are just supposed to accept being uncomfortable in our own space and locker room for, like, the feelings of one.”

The case of Thomas shows how the LGBT agenda is destroying rationality and empowering mentally-ill perverts throughout society.

“The school was so focused on making sure Lia was okay, and doing everything they possibly could do for her, that they didn’t even think about the rest of us,” the teammate said.

“It just seems like the women who built this program and the people who were here before Lia don’t matter. And it’s frustrating because Lia doesn’t really seem to be bothered by all the attention, not at all. Actually she seems like she enjoys it. It’s affected all of us way more than it’s affected her,” she added.

Big League Politics has reported on the push back against Thomas from individuals who have not lost their conscience and refuse to comply with this demonic push against all that is natural and holy:

“A USA Swimming official resigned in protest of male swimmer Lia Thomas, saying she can’t back a sport that allows “biological men” to compete alongside women.

“I can’t do this,” Millen wrote in her resignation letter, which the Washington Examiner reported. “I can’t support this.”

Big League Politics has covered the story of male swimmer Lia Thomas’ adventures on the woman’s swimming team in the past. The swimmer, who is a man, previously was alleged to have bragged about beating female swim opponents, saying it was “so easy I was cruising.”

… “This is not right because by doing this, we’re supporting this,” Millen wrote. “There are no swim meets if there are no officials.”

Thomas, the male swimmer who is competing against women, reportedly said he will not engage with the backlash he has received for his choice to participate in a women’s sport.

“I just don’t engage with it,” Thomas said earlier this month of the widespread backlash regarding her performance. “It’s not healthy for me to read it and engage with it at all, and so I don’t, and that’s all I’ll say on that.”