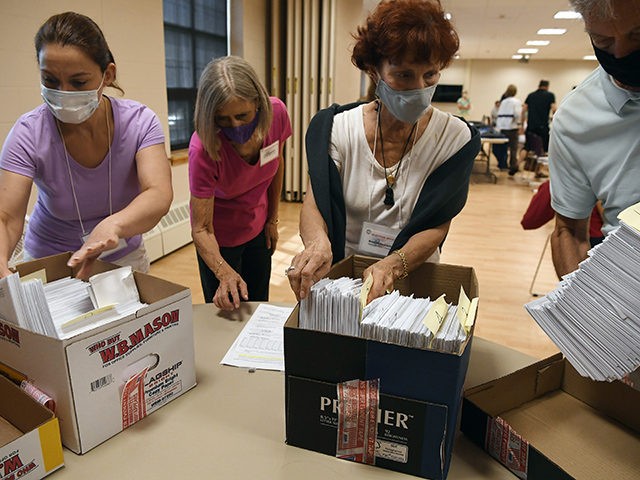 (Breitbart) – WASHINGTON (AP) — The U.S. Supreme Court on Thursday left in place an agreement that allows Rhode Island residents to vote by mail through November’s general election without getting signatures from two witnesses or a notary.

State officials had agreed to suspend the witness requirement because of the coronavirus pandemic. They have said that fulfilling the requirement, which has been in place since at least 1978, results in close contact between voters and others, which could expose people to the virus.

The high court rejected an effort by the Republican National Committee and the Republican Party of Rhode Island to put the agreement on hold, noting that “no state official has expressed opposition.”

Rhode Island allows voters to request to vote by mail for any reason, and the coronavirus has resulted in an enormous increase in mail-in voting. Nationwide, a surge in voting by mail is expected for the November general election because of the pandemic, and money to help the Postal Service process the anticipated increase has been a sticking point in talks for a virus relief package. President Donald Trump said Thursday he opposes additional funding.

Rhode Island is one of approximately a dozen states that require mail-in ballot envelopes to be signed by one or more witnesses or a notary. Republicans in Rhode Island argued that witness requirements deter voter fraud, though elections experts say voter fraud is rare. And they said the state is already allowing 20 days of early voting that will reduce the number of people who go to the polls on Election Day and has put in place other protections for voters and poll workers.

In July, the American Civil Liberties Union brought a lawsuit on behalf of Common Cause Rhode Island, the League of Women Voters of Rhode Island and others in an effort to extend the suspension.

State officials ultimately agreed to keep the requirement suspended for the Sept. 8 primary and Nov. 3 general election. Republicans objected, but a judge approved the agreement.

The Supreme Court noted in its brief order Thursday that the most recent election had been held without the witness requirement: “The status quo is one in which the challenged requirement has not been in effect, given the rules used in Rhode Island’s last election, and many Rhode Island voters may well hold that belief.”

Rhode Island Republican Party Chair Sue Cienki said in a statement that Republicans are disappointed with the Supreme Court’s decision.

“We fear that this decision will create more, not less confusion,” she said, noting that the Supreme Court intervened previously to allow Alabama to continue to impose a similar ballot witness requirement.

Rhode Island Secretary of State Nellie Gorbea said in a statement that the state would begin mailing out the requested mail ballots on Thursday for the September primary. She called removing the witness or notary requirement a “common-sense step that will protect Rhode Islanders during this pandemic.” Races on the September ballot include seats in both houses of the General Assembly, Rhode Island’s two congressional seats and one of the state’s two Senate seats.