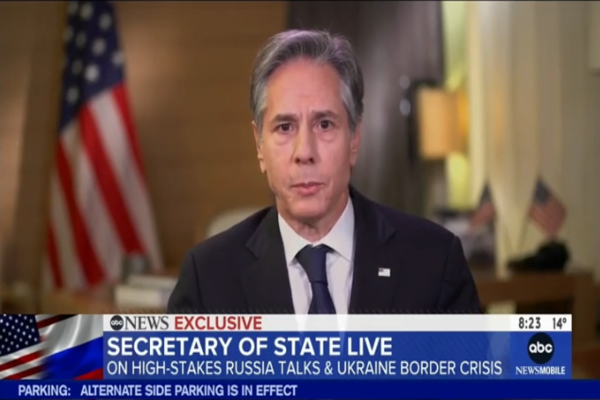 (breitbart) – Friday on ABC News’ “Good Morning America,” Secretary of State Antony Blinken sounded off on the growing tension between Russia and Ukraine.

According to Blinken, “it’s ultimately going to be President [Vladimir] Putin who decides” if the two nations go to war. He added that any Russian aggression “will have serious consequences.”

“Bottom line, are we further or closer away from war?” host George Stephanopoulos asked.

“You really have to ask President Putin,” Blinken replied. “It’s ultimately going to be President Putin who decides what Russia will do. But here’s where we are: Based on what we’ve heard in the last couple of weeks, we will put in writing both some deep concerns that we and other allies and partners have about Russia’s actions, not just with regard to Ukraine but more broadly when it comes to things that it does to threaten security. We’ll address some of the concerns that Russia has raised with us, and we’ll put some ideas on the table for how we might actually strengthen each other’s sense of security going forward. And then based on that and based on Russia’s response, we anticipate that we’ll get together again across the table and see if we continue to advance this through diplomacy.”

“[W] e’re also very conscious that Russia continues to have these forces on Ukraine’s border, continues to strengthen them, it continues to take steps that are escalatory, not deescalatory, and we will continue to do what we’ve been doing, which is building a very strong, united response from allies and partners to any renewed Russian aggression,” he added. “It’s very clear … that any renewed aggression will face massive consequences … coming from us, from Europe, and other allies and partners, and so there are basically two paths ahead. One is through diplomacy and dialogue. The other is Russian aggression that will have serious consequences.”