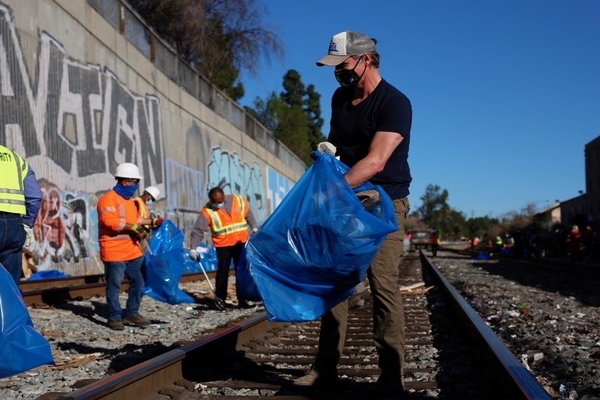 “I’m asking myself, what the hell is going on? We look like a third-world country,” Newsom said, before apologizing for using the word “gangs” to describe the attacks on the trains, stressing that he did not mean the word in a “pejorative” way.

As Breitbart News has reported, images and videos of torn boxes and packages were shared widely on social media last week as the country learned of the looting of cargo trains as the Union Pacific line slowed near L.A, providing a target to thieves in the absence of law enforcement.

Newsom joined workers in trying to clean up the mess, the latest in a series of media events where he has worked to clean graffiti and debris.

Secretary of Transportation Pete Buttigieg has done little about the theft, while claiming credit for having “saved Christmas.”

In a statement, Newsom touted his “Real Public Safety Plan,” which proposes $255 million in grants to law enforcement agencies. It does not reverse the cuts to law enforcement undertaken by many Democrat-run cities, including L.A., where Mayor Eric Garcetti cut police funding by up to $150 million in response to the Black Lives Matter riots in the summer of 2020. Newsom also promoted his programs aimed at cleaning up the state and assisting “local litter abatement efforts.”