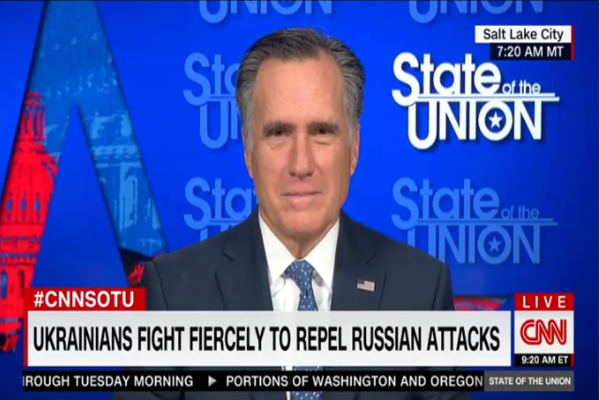 (breitbart) – Senator Mitt Romney (R-UT) said Sunday on CNN’s “State of the Union” that President Joe Biden had worked with the United States allies to put up a united front against Russia’s invasion of Ukraine “extraordinarily well.”

Romney said, “This is one of the greatest demonstrations of good versus evil that we’ve seen during our lifetimes and the demonstration of courage. Look at Vladimir Putin. Here he is behind this huge table in this big white room. It looks like a mausoleum where honesty and honor or have gone to die. Contrast that with Zelenskyy, with his courage, his passion, his true leadership. This is remarkable, and it’s having an impact.”
Anchor Dana Bash said, “Do you think it was a mistake for President Biden to rule out U.S. troops on the ground instead of trying to use what’s known as strategic ambiguity to deter Vladimir Putin from invading in the first place?”

Romney said, “Well, there really wouldn’t have been an ambiguity. We don’t have the kind of troop strength and material of war in the region to be a serious threat at that point. Look, the Biden administration has done some things very well and some things not so well. The not-so-well side is they continued the policy of prior administrations not to provide the defensive weapons Ukraine needed. The positive thing was sharing our intelligence with our allies and combining our efforts with our allies. Look, we used to be 40% of the world economy, today we’re about half of that. For us to have the economic clout yes used to have in the 50s, 60s and 70s, we do need to combine with our allies. That is something President Biden has done extraordinarily well.”