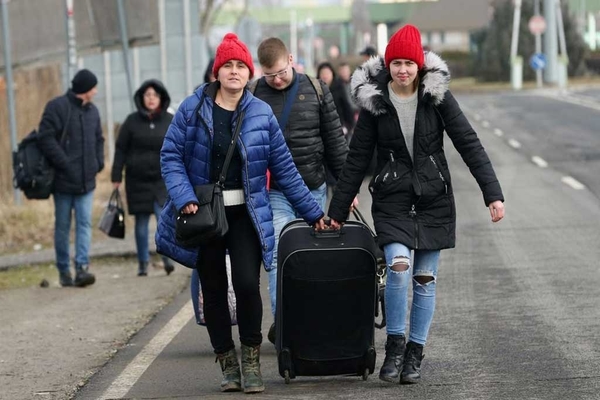 (breitbart) – The UN Refugee Agency said Saturday that nearly 120,000 people have so far fled Ukraine into neighbouring countries in the wake of the Russian invasion.

The number was going up fast as Ukrainians grabbed their belongings and rushed to escape from a deadly Russian onslaught on their nation, including an attempt to take the capital.

“Almost 116,000 have crossed international borders as of right now. This may go up, it’s changing every minute,” said Shabia Mantoo, the spokeswoman of the UN High Commissioner for Refugees. “It’s very fluid and changing by the hour.”

The agency expects up to 4 million Ukrainians could flee if the situation deteriorates further.

Mantoo said most were heading to neighbouring Poland, Moldova, Hungary, Romania, and Slovakia, and even some into Belarus — from which some Russian forces entered Ukraine.

She did not immediately have details on numbers by country, but by far the largest numbers were arriving in Poland, where some 2 million Ukrainians have already settled to work in recent years, driven away by Russia’s first incursions into Ukraine in 2014 and seeking opportunities in the booming economy of their European Union neighbour.

Poland’s national conservative government has taken a strong line against the attempted illegal immigration of mostly Middle Eastern men into the country via Belarus, a client state of Russia which has allegedly facilitated Russian forces’ northern offensive towards the Ukrainian capital of Kyiv (Kiev) and is believed to have orchestrated the aforementioned migrant influx as a form of destabilising “hybrid warfare”.

Despite having forcibly repelled the often violent migrants on the Belarusian frontier (see video below), Poland has said it will welcome genuine refugees from Ukraine with open arms, with the government reporting on Saturday morning that more than 100,000 Ukrainians had already crossed the Polish-Ukrainian border in the past 48 hours.

Poland’s Prime Minister Mateusz Morawiecki has issued a statement assuring Ukrainians they will be allowed to cross without the identity papers and Covid documentation which would usually be required, and that they are even welcome to bring their pets with them.

At the Medyka border crossing, a line of vehicles waiting to enter Poland stretched 15 kilometres (9 miles) into Ukraine, according to people crossing the border, Polish broadcaster TVN24 reported.