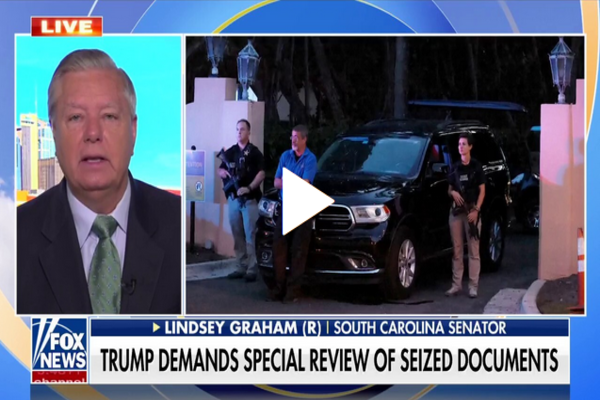 (breitbart) – Senator Lindsey Graham (R-SC) said Wednesday on FNC’s “FOX & Friends” that a special review of documents seized from former President Donald Trump’s Mar-a-Lago estate is needed because he believes the Department of Justice was not trustworthy.

Anchor Brian Kilmeade said, “Senator Lindsey Graham has been calling for a full release of the affidavit. They’ve got to do something by noon tomorrow. Senator, it’s amazing the detail we are getting in The Washington Post and The New York Timesagain with all of this.”

Graham said, “This is the playbook of the Russia investigation where you read in The New York Times and The Washington Post about the investigation that all turns out to be BS. So what do I want? I want a special master to look at what was seized. I don’t trust the taint team. I want somebody outside of DOJ to look through these documents to see what is privileged, what is attorney-client.”

He added, “Number two, I want the affidavit released to the American public. We are 80 days before an election, a midterm election, and we are going to be reading every few days in The Washington Post and The New York Timesand other liberal media outlets about what is in these documents and about what Trump knew and what he did. If you release the affidavit, all of us can judge what is there or not there. So this idea of drip, drip, drip, 80 days before an election, we need to see the affidavit.”