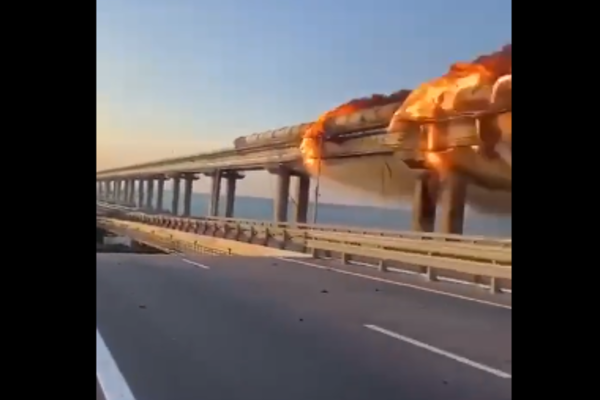 (breitbart) – Russia’s Federal Security Service (FSB) announced that it has arrested eight people allegedly connected to the bombing of the bridge connecting the Crimean peninsula and the Russian mainland and went on to formally accuse the Ukrainian Defence Ministry of orchestrating the attack.

On Wednesday, the FSB said that it has arrested eight individuals, including five Russian nationals as well as three Ukrainians and Armenians for their purported role in the Saturday truck bombing of the Kerch Strait Bridge, a strategically and symbolically significant infrastructure project for Moscow after it illegally invaded and annexed Crimea in 2014 with little pushback from Western powers.

The Russian intelligence service went on to claim that the attack was orchestrated at the behest of the head of Ukrainian Defence Ministry’s Main Intelligence Directorate,  Kirill Budanov as well as his “employees and agents”, Russian state-owned media Sputnik News reported.

In addition, the FSB said that it has identified a further 12 accomplices in the Kremlin termed terror attack, including three Ukrainians, two Georgians, and an Armenian national. The spy agency said that it believed that they were instrumental in helping ship the explosive materials used in the attack through Bulgaria to Georgia, before being taken through Armenia. It also said that five Russian nationals were identified in helping forge documents for a fake firm in Crimea to receive the explosive materials.

The FSB said that the attack itself was allegedly carried out by an employee of the Ukrainian Main Intelligence Directorate employee, whom they claimed presented himself as Ivan Ivanovich. Pledging that the investigation into the “terrorist attack” will continue, the agency said that “all organizers and accomplices, including foreigners, will be held accountable in accordance with Russian law.”

Rebuffing the allegations, Ukrainian spokesman Andriy Yusov said: “All the activities of the FSB and [Russia’s] Investigative Committee are nonsense,” adding: “They are fake structures which serve the Putin regime, so we’re definitely not going to comment on their latest announcements.”

Although Ukraine has not admitted to the attack, immediately following the blast, Mykhailo Podolyak, an advisor to President Zelensky posted a picture of the aftermath with the caption: “Crimea, the bridge, the beginning. Everything illegal must be destroyed, everything stolen must be returned to Ukraine, everything occupied by Russia must be expelled.”

The bombing of the bridge has nevertheless resulted in escalated fighting and tensions in the conflict, with Russia launching a country-wide bombardment of infrastructure since Monday, with rocket attacks raining down upon the capital of Kyiv (Kiev).

Russian President Vladimir Putin, who had already claimed that the attack was a terrorist plot hatched by the Ukrainian government, has warned of a “harsh” response should any other areas within the Russian federation be targeted.