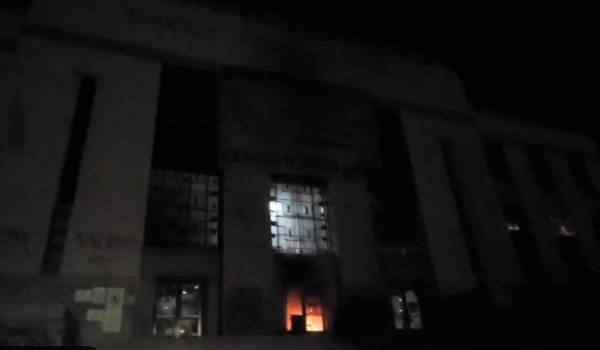 Hundreds of people were in the streets of Oakland in solidarity with the rioters in Portland, who have been out in force for nearly 60 days straight.

You may not use this video for credit. All videos for Associated Press pic.twitter.com/TKmDADYsod

“Some within the crowd of 100s of demonstrators vandalized the police station. Breaking windows, spray painting, shooting fireworks and pointing lasers at officers and helicopters. We ask for organizers to keep the protest peaceful,” the Oakland Police tweeted with the hashtag “WallOfMoms” referring to the liberal women who have been forming human shields for the rioters.

Fireworks and dangerous projectiles are some of the items agitators used to assault officers. We ask the organizers of tonight's demonstration to work with us, calling for peace and help us provide safe spaces and safe places for demonstrators. pic.twitter.com/ImpQdquirU

The rioters marched with shields as they attempted to spark a confrontation with police.

Big portion of the group has dispersed. But those that remain are headed back to OPD station on Broadway. pic.twitter.com/mrjYVeyNhP

In Austin, Texas, an Black Lives Matter member who was believed to be armed when he approached a vehicle at an intersection was shot and killed by the motorist.