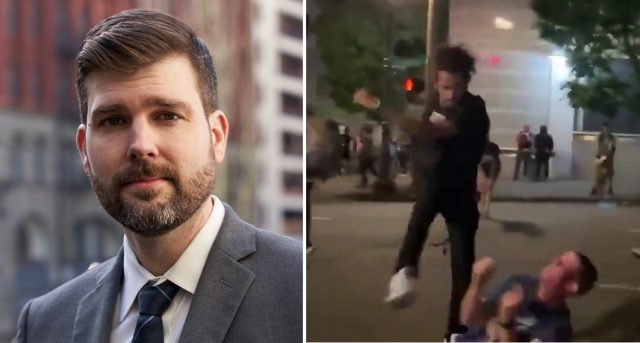 (thegatewaypundit) – Though recently sworn in Multnomah County District Attorney Mike Schmidt has elected to drop charges on most of the protesters who have been arrested in Portland over the last 2 1/2 months of nightly “unlawful assemblies” and riots, he has announced that plans on pursuing charges against the terrorists who pulled a man out of his truck and beat him senseless in the street.

Portland police officials say they are investigating a violent assault caught on camera Sunday night that sent a man to the hospital with serious injuries.

Video from a witness shows several people beating the driver unconscious after pulling him out of the truck. Police are investigating, and KATU is still trying to find out what happened before the truck crashed.

The Multnomah County District Attorney condemned the actions in the video.

Assaults will not be tolerated in our community. The videos recently posted to social media that show a person being violently pushed to the ground from behind and another person being kicked in the face are extremely concerning. The actions depicted in these videos are universally rejected as wrong – and the actions are illegal. I condemn this violence. Assaults on community members and police officers undermine everything our community is doing to bring meaningful and lasting change to the criminal justice system and beyond. My office is coordinating with law enforcement regarding their investigations into this type of assaultive behavior. Assaults and other violent crimes will be prosecuted when the evidence supports such action. If you have information on these or other crimes, please contact the Portland Police Bureau or Crime Stoppers of Oregon. – DA Mike Schmidt

Police said they are still looking into what led up to the assault. According to Portland Police, the driver might have been trying to help a transgender woman who had some of her things stolen near Southwest 4th and Taylor Street, which is where the incident began.

If you have any helpful information, they’d like you to contact Detective Brent Christensen at 503-823-2087 or at [email protected]

Portland police took to twitter to ask the public for any information:

Many responded, ID’ing the prime perp as Marquise “Keese” Love, who is apparently a security guard and airport ramp worker, as well as a part time DJ. Some are saying he has a past history of domestic abuse.

A pretty complete video of the altercation and what led up to it has been posted on YouTube. The terrorists start to converge on his truck and begin to punch a blond woman, and the truck driver appears to try to intervene. Then the terrorists start to target him and he tries to get away. After he speeds off, he crashes a couple blocks ahead, and that’s when the terrorists go to town on the guy, pummeling him, ordering him to the ground. They say “You’re not leaving bro” as they surround him and hold him down, committing the crime of unlawful imprisonment. He gets up again at some point and tries to get back to his car. The mob once again assaults him and tackles him to the ground. He tries to get up in a dazed state, and that’s when Love delivers a kick right into the guy’s head that leaves him out cold, and others start to steal items from his truck. “GET THE WHITE MAN’S TRUCK” you can hear one of them shout. Throughout all of this several others try to keep the peace, but to no avail. In another video you can see the terrorists dragging a crying woman away who was apparently the driver’s wife.

It appears as though the truck driver initially came to the aid of a transgender woman who was being assaulted by several terrorists. Here’s the video of what led up to it all:

On August 16, 2020 at 10:27 p.m., Portland Police officers responded to an accident call at the intersection of Southwest Taylor Street and Broadway. The call read that “protestors chased a white Ford 4×4, which has crashed” at that location and “protestors drug him out of car.” Another witness called prior to police arrival and reported that 9-10 people were “beating the guy.”

Officers responded and found an adult male who was unconscious with injuries. The victim was transported to an area hospital with non-life-threatening injuries and is recovering.

Portland Police became aware of video’s circulating through social media, which show various events of what led up to an assault of the victim. The series of events was carried out in different locations involving many different people. This in an ongoing investigation and the Police Bureau will provide further information as it is available. Below are chronological links to the videos posted on Twitter by Drew Hernandez @livesmattershow and Kalen From Scriberr @FromKalen:

Investigators learned that the victim may have been trying to help a transgender female who had some of her thing stolen in the area of Southwest Taylor and 4th Ave, the location where this incident began. That person has not been contacted and their identity is unknown. Investigators would like to speak to this person.

The Portland Police Bureau has been learning of criminal activity captured on social media, as it relates to the ongoing protests, which go unreported. Portland Police would like to remind witnesses and victims to call police immediately so that a timely investigation can begin and valuable evidence can be collected.

It’s important to note that these incidents took place just a few blocks from police headquarters, when they knew protests and other unruly acts were going on, yet the police decided they would just hang back and not intervene while all of these was going on.