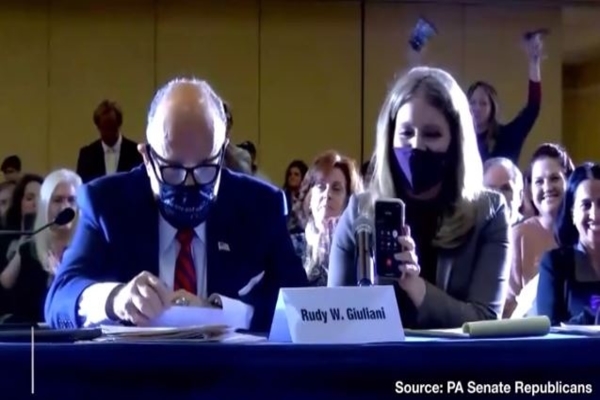 (breitbart) – Former New York City Mayor Rudy Giuliani appeared at a public hearing of Pennsylvania Republicans Wednesday to review his claims of voter fraud and election irregularities in the commonwealth.

The hearing was hosted by the Pennsylvania Senate Majority Committee, led by State Sen. Doug Mastriano (R-Adams/Cumberland/Franklin/York) at the Wyndham Hotel in Gettysburg.

President Trump is relying on Giuliani and campaign lawyer Jenna Ellis to represent his legal battle to challenge 2020 election results in each state.

An audience of Pennsylvania Trump supporters also appeared to listen to the presented evidence.

“All we ask is that you listen to the facts that we are presenting and then evaluate it,” Giuliani said.

Several witnesses appeared in person to describe the voting irregularities they witnessed as they were prevented from meaningful access to the voting process.

“Republicans were uniformly not allowed, kept out, put in chutes like they were cows to keep them away from seeing these ballots,” Giuliani explained.

Other witnesses explained that thousands of ballots were counted in secret, as they were kept out of the room.

Leah Hoopes from Delaware County, Pennsylvania said she served as a poll worker for three straight days as the results came in.

“What became of concern was the back room, which had no observers, no line of sight or transparency into the process. There was no cooperation, complete resistance from election night to every day after,” she said.PA Senate RepublicansVolume 90%03:1403:1403:44

Hoops said she and others were intimidated for coming out and signing affidavits about their concerns with the election.

“We have stuck our necks out, been intimidated, threatened bullied, have spent countless hours away from our families, friends, and jobs,” she said during the hearing.

Attorney Justin C. Kweder, a certified canvass observer, said he returned as an election observer for ten days at the Philadelphia Convention Center.

He said that Republican observers were kept between 10-200 ft. away from the election counting process.

“It was impossible for me or any observer to see what the workers were doing with any type of specificity,” he said.

He also raised concerns about more than 5,000 damaged mail-in ballots that were duplicated by poll workers.

Other witnesses appeared via video teleconferencing to talk about their concerns with “illegal pre-canvassing,” as Democrat counties contacted voters to help “cure” their ballots so they would be counted.

One election observer testified that a poll worker repeatedly cursed at her and threatened to slap her in the face when she tried to verify some of the steps in the voting process.

Giuliani also brought an election security specialist to talk about the voting systems in the United States.

The expert questioned the anomaly of reporting spikes in the voting counts for Biden late in the evening as a “prime indicator of fraudulent voting.”

The audience laughed and gasped in shock as the expert noted a point when a spike of votes recorded in Pennsylvania had 600,000 votes for Biden and only 3,200 for Trump.

President Trump called in to the hearing, appearing impressed by what he had heard from the witnesses.

He vowed to fight the results of the election and thanked everyone present for sharing their testimonies.

“We have to turn the election over, because there’s no doubt,” Trump said. “We have all the evidence, we have all the affidavits, we have everything. All we need is to have some judge listen to it properly without having a political opinion or having another kind of a problem.”PA Senate RepublicansVolume 90%01:1800:4210:49

The president praised Giuliani for continuing to fight the case, while other lawyers backed down.

“This is going to be your crowning achievement because you are saving our country,” Trump concluded.

Pennsylvania Republicans also took time to question Giuliani and Ellis about the case and the road forward for challenging the election.

State Sen. Mastriano celebrated the successful hearing and thanked the witnesses for stepping up.

“As Jesus said, ‘You shall know the truth and the truth shall set you free,’ and guess what, the truth’s out there,” he said as the hearing drew to a close.

He drew comparisons of their fight to the patriots who birthed freedom in Philadelphia, fought at the Battle of Gettysburg, and the heroes of Flight 93.