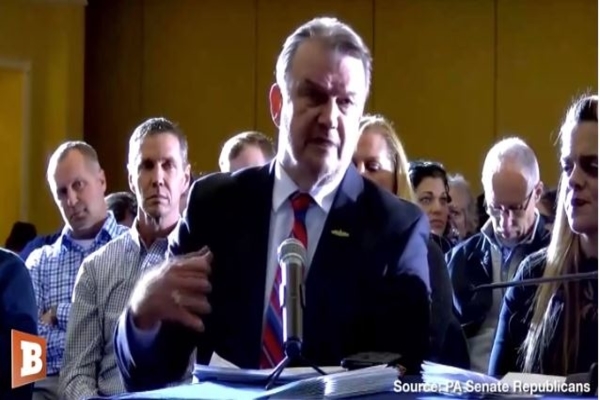 (breitbart) – Gregory Stenstrom, a poll watcher in Pennsylvania and CEO of a data sciences company, testified on Wednesday he witnessed over 24 instances of USB cards being connected to voting machines during ballot counting process.

Stenstrom spoke at a State Senate Majority Policy Committee hearing in Gettysburg, PA. He addressed his observations as a poll watcher in Delaware County, PA:

I brought it to their attention. I objected, and I said this person is not being observed. He’s not part of the process that I can see, and he’s walking in with baggies — which we have pictures of and it was submitted in our affidavits — and he was sticking these USBs into the machines.

So I personally witnessed that happen over 24 times. We have multiple other witnesses who saw it, including Democrat poll watchers.

Stenstrom said he had been told be U.S. Attorney William McSwain such conduct with USBs and voting machines is unusual.

“As of today, 47 USB cards are missing, and they are nowhere to be found,” added Stenstrom. “I was told personally that these 24 to 30 cards that were uploaded weren’t there.”

Stenstrom stated he and a Democrat poll watcher observed between 60,000 and 70,000 unopened mail-in ballots in a locked room:

What I observed in the locked room in the back office was 70,000 unopened mail-in ballots. They were in boxes of 500, stacked in neatly. The gentleman that came in with me is a Democrat poll watcher [and] is a forensic pathologist, a very detailed, very dedicated man and he took meticulous notes, as well, and I verified with him, “Are you seeing what I’m seeing?”

And nobody knows we have a picture in here of a large number of boxes that I took that were filled with what appeared to be ballots sitting by the BlueCrest machine. They were there for about three hours and then they disappeared.

Stenstrom was initially obstructed in his attempts to observe the goings on within the “counting center” on Election Day:

I had been told that there were 10 to 20 GOP poll watchers down there [at the counting center], and everything was well in hand, and out of curiosity I decided to go down. I arrived at six o’clock with four other gentlemen — former military and some good citizens from Delaware County — and we weren’t allowed to get in until eleven o’clock at night, and we had to get some legal help to get us in. So it took us five hours to get upstairs.

Stenstrom described the election process as “forensically destructive” and lacking a verifiable chain of custody for ballots between their casting and counting.

What I saw as a friend’s six expert was an election process that was forensically destructive in the manner it was conducted, with the envelopes being separated from the ballots and gone to the other side of the room. The problem with that, from being forensically destructive, is that when you go to do a recount, okay, the machines do a pretty good job of recounting so if I have 120,000 mail-in ballots at one side of the room and envelopes at the other side of the room, it’s still going to come out 102,000 votes for Vice President Biden and 18,000 votes for President Trump. I don’t care how many times you recount those votes. Ballots are going to come out the same every time. So the notion of a recount in a forensically destructive process doesn’t work very well.

Stenstrom said all procedures defined by the Delaware County Board of Elections regarding the chain of custody for ballots were not followed.