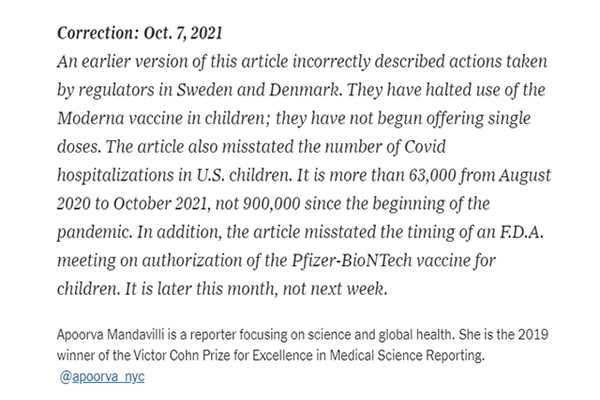 (IL) – The New York Times has had to issue a lengthy, embarrassing correction to a report that wildly inflated the risk of covid to children in order to push Pfizer’s experimental mRNA shots on kids as young as five.

From The New York Times:

An earlier version of this article incorrectly described actions taken by regulators in Sweden and Denmark. They have halted use of the Moderna vaccine in children; they have not begun offering single doses. The article also misstated the number of Covid hospitalizations in U.S. children. It is more than 63,000 from August 2020 to October 2021, not 900,000 since the beginning of the pandemic. In addition, the article misstated the timing of an F.D.A. meeting on authorization of the Pfizer-BioNTech vaccine for children. It is later this month, not next week.

Apoorva Mandavilli is a reporter focusing on science and global health. She is the 2019 winner of the Victor Cohn Prize for Excellence in Medical Science Reporting. @apoorva_nyc

This “award-winning” reporter inflated the covid risk to children by over 1400% in an article pushing for kids to take an experimental shot from Big Pharma for a disease which poses them minuscule risk.

Mandavilli either intentionally lied to scare people into getting their kids vaxxed or has no idea what she’s reporting on. I don’t know which is worse as she writes almost entirely about covid.

As Free Beacon reporter Aaron Sibarium half-joked after seeing the Times’ correction, “The NYT used to have a science reporter who didn’t make these mistakes. Wonder what happened to him.”

Mandavilli writes like she’s a Pfizer PR agent. This is currently the top tweet she has “pinned” to her Twitter account (it’s another one of her fearmongering propaganda pieces shilling the “safe and highly effective” vax to kids):

“BREAKING: The Pfizer-BioNTech vaccine is safe and highly effective in children 5 to 11, the companies say,” Mandavilli posted.

If Pfizer says it, then it must be true!